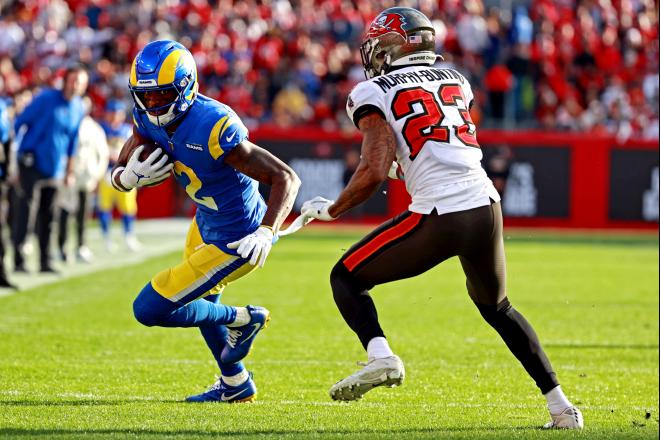 Watson is set to return from suspension in Week 13 against his former team, the Texans. Now… Watson has not played football in about 2 seasons, but do not forget he was a consistent top 5 QB for multiple years. Right in time for playoffs… if Watson is available and you are in need, grab him!

Pacheco earned his most carries of the year this past Sunday against the Jaguars. In my opinion, the rookie has established himself as the top running threat out of the Chiefs backfield. On an offense that is as explosive as this one, I’m grabbing anyone I can!

Even though the Bucs are heading into the bye this week, White is a must add for fantasy owners after his performance against Seattle where he ran for 105 yards on 22 attempts. The situation with Leonard Fournette and his injury should be monitored before inserting him into lineups, but White is certainly worth the roster spot.

Westbrook-Ikhine exploded this past Sunday for 5 catches, 119 yards and 2 scores. Now the odd part about this was Westbrook-Ikhine’s target share this game compared to the rest of the season. He has never had more than 4 targets in a game before last week where he had 8. Could this be a one off? Possibly, and more likely… probably. However, he is certainly worth a pick-up if you are in need at WR.

With absences to both Mike Williams and Keenan Allen, DeAndre Carter has been a consistent threat for Justin Herbert and the Chargers offense. Since Williams injury, Carter has averaged just under 6 targets per game and has had a stronger game than the last each week.

With Cooper Kupp likely to be out of the Rams lineup for a week or two, Van Jefferson is my top pick to pick up at least some of the slack. No one is going to put up Cooper Kupp numbers… but someone has to catch that ball!

Now this is an observational pick from yours truly. I am predicting a big game for Isaiah McKenzie this upcoming week against the Browns. Why? Because I just watched a relatively unknown fantasy commodity named Trent Sherfield have a career day against the Browns, who have the Bills up next. McKenzie is my favorite plug and play this week!

Johnson has possibly become the favorite red zone target for Andy Dalton. As I’ve said a million times, this is the thinnest position in football, and outside of Alvin Kamara, the Saints really have not had a consistent aerial threat this season. Grab Johnson.