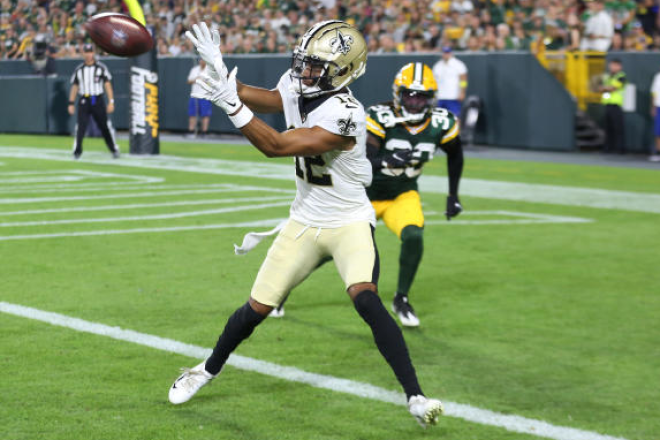 The leaves are falling, it’s cold in the morning, everyone is selling pumpkin flavored items... Football season is in full swing! It feels like just yesterday I was drafting and now I’m contemplating once again why I do this to myself every year. The highs and the lows of fantasy football... you've got to love it, right? Let’s see if we can't reach some highs in Week 5 with this week's starts and sits.

After looking solid in his first performance of the year, Zack Wilson looks to be a good fantasy contributor in the right matchups. If you are feeling iffy about your QB this week, take a long look at Wilson. He’s up against a Dolphins defense who hasn’t been able to make many stops this season. The Dolphins have given up the second most passing yards and an 8:1 TD-Int ratio. Zach Wilson and all his weapons will make some big plays. Don’t be surprised if he finishes as a top 12 QB this week.

Even in a split backfield Harris is turning into a must-start RB2. Now coming off his third straight game with a touchdown, Harris has earned his way into your lineup and you should be excited about him this week. He’s at home against a Lions defense giving up a whopping 5.6 yards a carry and a staggering 10 TDs to opposing running backs; both league lows on defense. Yes, Rhamondre Stevenson has been matching him in touches, but with the gaping hole in the Lions defense look for the Patriots to pound the ball with both backs. Pencil Harris in as a RB2 with upside.

Olave is still available in almost 20% of leagues, I would hurry up and get him because that won’t last another week. Through 4 games Olave has 36 targets. Those type of targets earn him a spot in your starting lineup alone. Plus, he has 204 yards receiving in his last two games. He now gets to play a Seattle secondary who has already given up over 1,000 yards through the air this season. Make sure Olave is in your lineup when he goes off this week.

Just a few weeks ago Njoku made the sit list against the Jets and underperformed. The two games following he’s combined for 14 catches for 162 yards and a TD. Njoku's target share has gone up and he looks like Jacoby Brissett’s favorite target at the moment. Make sure he’s in your lineup this week in a home matchup against a underperforming Chargers defense.

The Titans played well last week as a good streamer defense against the Colts. This week they should be the top of the list of streamer defenses. They are up against the Commanders who have looked abysmal on offense these past few weeks. Carson Wentz has been sacked a league high 17 times already. The Titans have been getting after QBs early in the year with 11 sacks. If you are not confident in your defense this week, Titans are available and will finish as a top ten play this week.

Yes, Geno has played well above expectations this season but I would pump the breaks just a bit this week. Don’t let a big performance last week against the Lions bait you into making Smith your QB1 this week. The Lions have given up the second most passing yards in the league and have given up a 7:1 TD-Int ratio. Now he’s in hostile territory against a defense that has only given up 3 TDs through the air this year. He’s a good steamer play other weeks, but keep him on the bench this week.

Yes I know you don’t want to hear this, but Najee Harris needs to be benched this week. Just look at the facts. He touched the ball 18 times last week for 74 yards against a middle of the pack defense in the Jets. Now, with four games under his belt, Harris is only averaging 3.5 yards per carry. He gets a Bills defense who has allowed the 4th fewest rushing yards this season. I know it’s hard to bench a top draft pick in a volatile position, but with the low YPC and only 3 catches in the last 2 weeks it just doesn't make sense to play him against a top tier defense with a rookie quarterback at the helm.

After a poor performance last week against Dallas, Terry Mclaurin makes the sit list even with a favorable matchup against Tennessee. It’s not all Terry's fault, the offense has zero identity and they don’t know what they want to do. Three different RBs had more touches then the star wideout. Also, Carson Wentz has gone downhill fast after Week 1 and I just can’t trust anyone in this offense right now. I’d put Terry on the bench for a few weeks until the Commanders offense starts to click.

I know it seems kinda rough making the sit list after having a 2 TD game but you should stay far, far away from Alie-Cox this week. His targets just don’t warrant starting in any fashion. Even with his 6 targets last week, he only has 14 total all season. I would keep him sidelined until he gets a bigger target share or if it’s a better matchup. Don’t let last week’s performance trick you into playing him this week.

Trap game alert! Yes I know the Dolphins defense is top of the waiver wire but that doesn’t mean you have to go get them. The Dolphins have given up 82 points in just the last 3 games. The Jets are not the bottom feeders they once were with Zach Wilson back at the helm and a lot of talent on the offensive side of the ball. The matchup might look good at a glance, but this Dolphins defense has been allowing too many points and not forcing enough turnovers. They should not be in your lineup this week.