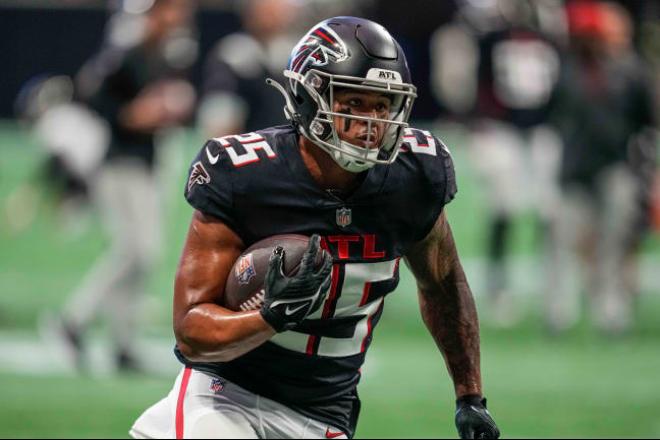 With Trey Lance’s season ending this past Sunday, the 49ers get a familiar face back under center with Jimmy Garoppolo. Coming out of the dugout this past Sunday in a win over the Seahawks, Jimmy G was effective throwing for 154 yards and a touchdown, while also adding another touchdown on the ground. This team won a lot of football games with Garoppolo under center and could make one final run before parting ways this offseason.

Don’t look now but Jared Goff is QB #10. Goff looks good in his second season with the Lions and had a great day this past week in a win over the Commanders. Goff threw for 256 yards and 4 touchdowns and travels to face a Minnesota team that just got lit up by Jalen Hurts.

Allegeir saw 10 carries for 30 yards in his debut NFL game. The rookie out of BYU was active this week after Damien Williams went to IR. It’s no secret the Falcons want to get their rookie involved, look for Allegier to possibly break out in the upcoming weeks.

Aaron Rodgers is practically begging for one of his receivers to step up. I think this is the first time I’ve ever seen a group of receivers playing with Rodgers that are all projected for less than 8 fantasy points. Green Bay has a 5-man rotation going right now… and Doubs is right up there after Sammy Watkins in snaps. I’ll bet on a future hall of famer throwing the ball and this rookie learning quickly.

This seems crazy to me. As an Ohio State Buckeyes fan, I thought Noah Brown left a season too early. He was drafted in 2017 by the Cowboys and no matter how much talent they’ve had in the receiver room, Brown has always made the 53-man roster. Brown is a big, physical receiver who’s typically been a blocking specialist. However, he has 5 catches in each of his first two games this season for 159 yards and a touchdown. He is the clear #2 behind CeeDee Lamb and should continue to see opportunities until Michael Gallup returns to the lineup.