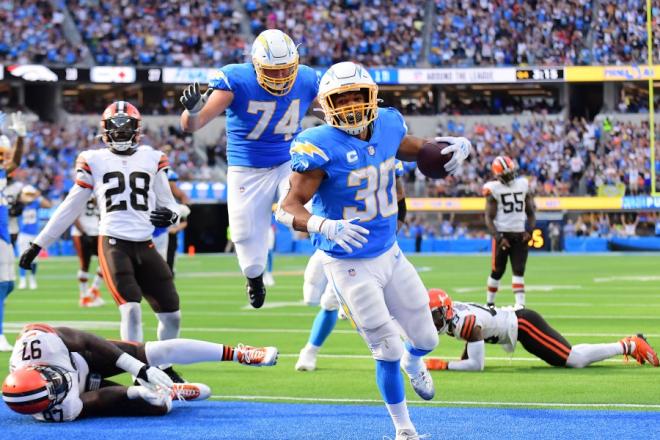 When Austin Ekeler scored four touchdowns against the Steelers in Week 11 of the 2021 NFL season, fantasy managers around the world were celebrating.

Ekeler put in a gem of a fantasy performance, swinging matchups with his prolific scoring. The Steelers had no answer for him in the red zone.

While the Chargers running back obviously had plenty of reason to celebrate such a dominant outing, he also had the bonus of selecting himself in fantasy football for the game with Pittsburgh.

Whether you know how to bet on the NFL or only occasionally tune into the Super Bowl, it’s clear that scoring four touchdowns is a pretty impressive achievement.

To give some context to how rare a quartet of scores is, Ekeler scored just three total touchdowns in 10 games in the 2020 season. He notched just 25 touchdowns in four seasons before the 2021 campaign.

Speaking after the game, Ekeler mentioned the fantasy impact of his four-score night.

He said, "I actually have myself on one of my fantasy teams, and I think I had 41."

While Justin Herbert gets many of the plaudits for the Chargers’ box office offense, Austin Ekeler has long been tabbed as an exciting prospect in Fantasy Football. Heading into the 2021 season, many viewed Ekeler as a breakthrough candidate as a dual-threat running back who could be snapped up after the bigger names went off the board.

Back in 2019, Ekeler finished fourth among running backs in PPR leagues. Melvin Gordon III has since departed, and Ekeler has been able to flourish as both a ground threat and pass catcher.

Only Christian McCaffrey and Cordarrelle Patterson have registered more receiving yards per game in 2021. It’s fitting that two of Ekeler’s four touchdowns against Pittsburgh came from receptions – his workload is split relatively evenly, helping to make the Chargers into an unpredictable offense.

He’s 10th in touches at the position and eighth in total yards per game. He’s effectively a rank higher than both of those marks too, with Derrick Henry sidelined for the season.

It’s no surprise that Ekeler knows his fantasy value after these comments in a press conference a few months’ ago.

The Chargers star said, "They're going to throw me the ball; I'm going to make things happen. If you want to get fantasy points, you better have me on your team. So, that's all I got to say. If I'm healthy, I'm going to score you points."

Ekeler has a chance to post some big numbers before the 2021 regular season wraps up. Facing the Bengals in Week 13, Giants in Week 14 and Texans on Boxing Day, the undrafted running back matches up with some of the league’s worst defenses.

Houston gives up the sixth-most points per game and the second-most rushing yards. The Giants’ numbers aren’t much better, and a high-scoring contest is likely between the Chargers and Giants.

Throw in games with the Raiders and Chiefs and Ekeler is bound to rack up some more big weeks.

Only Jonathan Taylor has scored more points from running back in 2021. It wouldn’t be a shock if Ekeler topples Taylor and finishes the year as the highest-scoring player at his position.