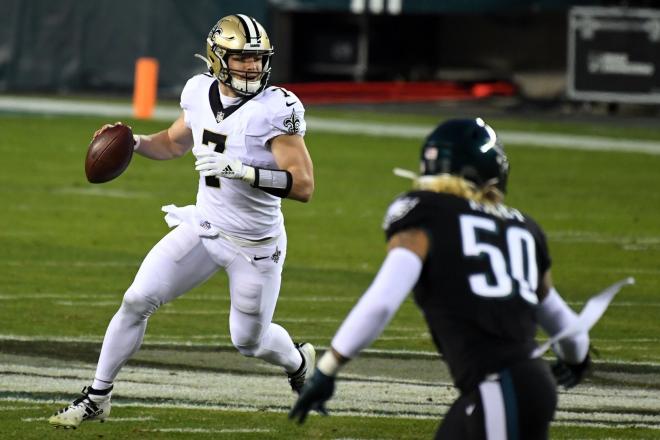 With fantasy playoffs right around the corner, here are 6 players you should target heading into Week 13 and your run at fantasy glory!

The fourth Manning brother is officially benched for Sean Payton’s favorite player of all time, it’s the return of Taysom Hill. Hill will officially be the starter for Thursday’s game against the Cowboys. Hill is a great dual-threat option for those looking for a bye week replacement or another QB in a super-flex / 2-QB league. Grab Hill this week!

It’s a full on carousel of running backs in Tennessee, and I am hopeful this is the last time I have to recommend one of them after whiffing on every other one they’ve thrown out there. Hillard had a monster game last weekend despite the Titans getting boat-raced by the red hot Patriots. Hillard put up 131 rushing yards on only 12 carries, ripping off a 68-yard touchdown in the process. Hillard looks like the best of the bunch and should be rostered in all formats.

From one carousel to another, Buffalo has no clue who they want to put on the field, but it certainly looks like Breida has emerged as one of their favorites. Still behind Devin Singletary, Breida has outplayed him over the last two weeks. Worth noting is that Zack Moss was a healthy scratch this week, leading me to believe there is a lot of confidence in Brieda going forward.

Dalvin Cook will miss at least 2 weeks with a torn labrum, leaving Alexander Mattison as the lead back in Minnesota. In Mattison’s two games replacing Cook as the starter he was very effective… in game one he put up 112 yards rushing and 59 yards receiving, in game two he put up 113 yards rushing, 40 yards receiving and a touchdown. Keep in mind these games were both against Seattle and Detroit, so don’t expect that type of production, but Mattison should be a starter in every format until Cook can return. PS - remember for next year, if you invest a 1st round pick in a RB, please, please, PLEASE take their handcuff.

DJax had a big game this past Thursday in an OT thriller against the Cowboys. He pulled in 3 receptions of 4 targets for 102 yards and a touchdown, including a 56-yard bomb in the first quarter. He didn’t get many targets, but it is only his 3rd game with the Raiders after being waived by the Rams. Jackson is a risky flex, putting him in the “boom or bust” category.

If you have space on your bench, Westbrook-Ikhine would be a great player to grab this late in the season. The Titans being on a bye this week only increases your odds of grabbing him for your late season push. Over his last 2 outings, Westbrook-Ikhine has 9 receptions for 132 yards and a score on 13 targets. Hey… someone has to catch passes in that offense.