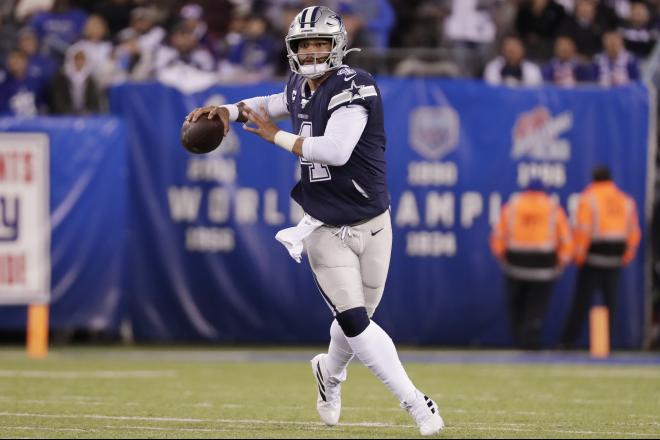 Does it seem like every week is getting crazier and crazier in the NFL? I mean, last week we were talking about three backups coming in and winning the game for their respected teams. Now, we talk about how we are a week removed from the Bills losing to the Jaguars and Allen Robinson having more than 30 yards receiving. Wow. Two things I never thought I would see this season.

But we are on to Week 10 now, as the weeks seem to fly by at this point. Going into this week's starts and sits, let's hope we don't have any crazy story lines... oh and Cam Newton is back on the Panthers. So...

Let's get into our Starts and Sits!

Prescott and the Cowboys were absolutely shutdown last week against the Broncos. But that shouldn't give you any fear playing Dak and his wideouts against a very bad Atlanta secondary. Prescott will get back into the stride of things and this will be the offense we once knew it to be.

Connor is all by himself for now. What does that mean? Over 100 yards from scrimmage and 3 touchdowns. Will he do that against a top rushing defense this week? Probably not. But he will have enough usage on a great offense and get plenty of redzone touches to return low end RB1, high end RB2 numbers. Play him this week and every week Edmonds is out.

Williams started the season hot, ending up a top 12 receiver in 4 of the first 5 games. He has since slowed, finishing his last three weeks outside of the top 36. We may see more of this boom-bust as the season carries on, but this week he faces a secondary allowing the 4th most touchdowns to opposing wideouts. If Williams is going to return to glory, it's this week.

Gesicki is a freak talent at tight end, who doesn't get the credit he deserves. He is also a target machine, and facing a terrible Ravens defense allowing the 4th most points to fantasy tight ends, Gesicki should be a top 10 option at the position this week.

The Cardinals defense has made a full switch from last year. All around, these defensive unit is one of the best so far this season. It will get easier for them as they face PJ Walker and the dwindling Panthers offense. Start with confidence.

Mayfield showed everyone he never needed OBJ to succeed. This week, after he puts up a stinker against the Patriots, wait for the news headlines to switch the narrative as if Baker does in fact need OBJ. The Patriots are a terrific defense, one that just finished last week number one in scoring and his currently allowing the third fewest points to opposing fantasy quarterbacks. With limited weapons at his disposal going into Week 10 (Chubb is on the COVID list), there are better options at quarterback this week.

Jordan Howard, Boston Scott and Kennith Gainwell. Who should you trust? The short answer is none of them. Howard and Scott are currently sharing a majority of the rushing touches and Gainwell is still getting most of the passing down volume. Who gets what and how valuable that touch is has fantasy managers already on edge, but a matchup with the Broncos should have you looking elsewhere. Playing with this backfield may feel like playing a game of roulette.

Patrick enjoyed a breakout performance last week and has finally established himself on the fantasy radar. But now it's time to sit him. Spending a majority of his time on the outside, the Eagles sport one of the best defenses against opposing wideouts (currently the 4th hardest matchup.) Unless you're in the slot, that is. This may be more of a Jeudy game. Not to mention Jeudy will get more reps on the field and Fant will return from COVID-IR. Tough matchup, and a lot of mouths to feed will led to Patrick coming up short for fantasy managers.

Schultz has been one of the best fantasy tight ends when you factor his ADP heading into this year. The Falcons are a middling defense against tight ends, but there are two factors will hurt Schultz's Week 10 outlook. Deon Jones, Atlanta Linebacker, is a tremendous coverage linebacker and won't have any problems handling Schultz. And the return of Michael Gallup. He will command a handful of targets in which Schultz was benefiting and thus capping his upside. A tougher matchup and a loss of targets, we'll get to see what his role will be with a fully healthy offense.

This has been a tremendous defense this year, and they're young, which means more room to grow. But with that comes growing pains. And it wont be because the Cardinals have a great offense, which, they do. But the Panthers offense will continue to put this defense in bad scoring positions, making it very hard to trust them in Week 10. I'd look elsewhere.