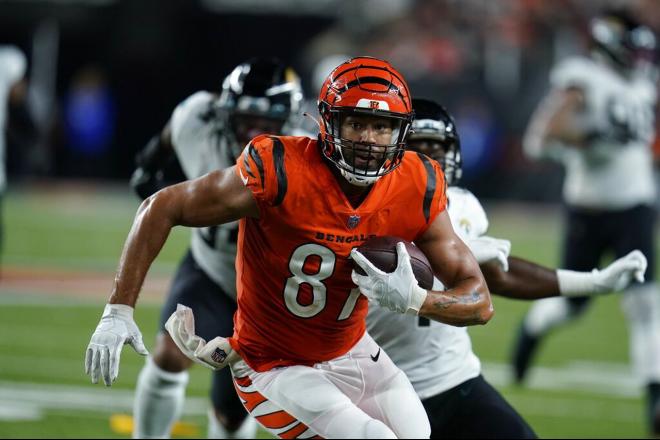 We’ve arrived at the former halfway point of the season… which makes me wonder what the new halfway point is? Is it Thursday this week? Is it after the 1pm games on Sunday? Who knows. Anyway, it’s been a wild season. The Cardinals are undefeated, the Bengals are in 1st place in the AFC North, and the Chiefs are tied for last in the AFC West… just like everyone predicted. Here are 7 players to target heading into Week 8!

For fantasy managers with Lamar Jackson or Derek Carr as their QB, Teddy Bridgewater can be a formidable replacement this week. Bridgewater has been consistent this season outside of a Week 4 stinker against the Ravens. Bridgewater has thrown for at least 2 scores in 5 of 7 games this season. He won’t make you the highest scorer, but you know what you’re getting. Oh, and he’s playing the worst passing defense in the NFL.

Wentz has been under the radar this season, but has been a good fantasy option for those in a pinch. Over his last 4 outings he has thrown for 8 touchdowns and 2 turnovers (0 INTs, 2 FUM). He is averaging just under 17 fantasy points per game and has a plus matchup this weekend against the Titans - although they did just make Patrick Mahomes look more like his younger brother Jackson.

With Miles Sanders being designated to week-to-week status, Kenneth Gainwell and backfield mate Boston Scott will see an uptick in their usage. Both are good options, although I do tend to lean more towards Gainwell. He got action in both the rushing and passing attack this past week, turning those touches into 12 fantasy points. I would expect a shared backfield, but Gainwell, in my opinion, has more upside.

Rookie Rhamondre Stevenson was a healthy scratch this past weekend against the Jets because of pass-blocking issues. This led to Damien Harris having a field day and Brandon Bolden hauling in 6 passes on 7 targets for 79 yards and a score. If you need a bye week replacement or are in a PPR format, Bolden is a solid option.

Everyone else in this receiver room is questionable for Monday night's game against the Chiefs. Slayton operated as the #1 this past week against Carolina, he had 5 receptions on 9 targets for 63 yards. With an upcoming matchup against a defense allowing the 4th most points to wide outs, look for Slayton to have a big day.

I know the Ravens are on a BYE, but I love Rashod Bateman. He is a legitimate threat opposite of Marquise Brown and showed flashes of his ability this past Sunday against the Bengals. In his first two games the rookie out of Minnesota had 6 targets in each contest and that number should only increase. Not to mention the BYE week should also help Bateman get up to speed - there is something about rookie WR’s and their third game… Tee Higgins scored twice last year in his and Justin Jefferson went for 175 and a score in his.

With 5 touchdowns in his last 4 games, Uzomah has been benefitting from the stellar play of Joe Burrow. You can probably also give a lot of credit to Jamaar Chase who has been absolutely blowing the lid off of opposing defenses all year. The only issue with the Bengals pass-catchers is they have so many weapons that targets are hard to come by. Uzomah is averaging just under 3 targets per game and has only had more than 3 targets in a game once this season. He’s worth a roster spot in deeper formats, but be weary of his target share.