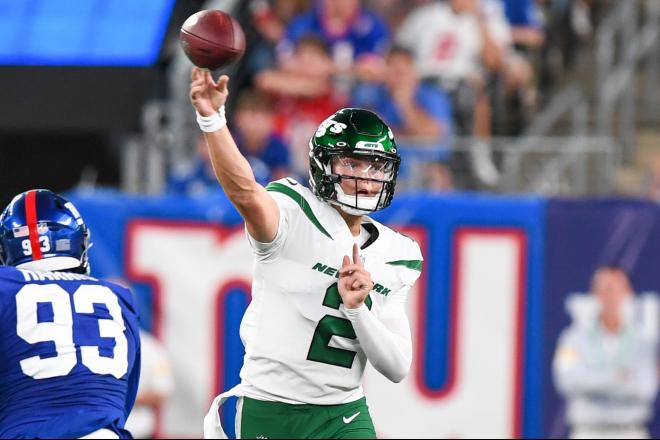 This applies all the more to quarterbacks, particularly first-round draft choices who've been surrounded by hype since they strutted onto the stage and put on their respective teams' jerseys at the 2021 NFL Draft back on April 29.

Which means they've been very good at times - and looked, well, like a raw rookie at others.

That's to be expected.

As good as all five pivots were during their time in college, the NFL is a different game. Players are bigger, faster, stronger and above all smarter.

There isn't nearly as much time to make a play as there was in college. Decisions must be quick, correct and well-executed. Sure, a strong arm or otherworldly athleticism can get you out of a tight spot, but the execution and timing must be precise.

The Jets' Zach Wilson is a prime example of how a rookie quarterback can look from one week to the next.

Initially, he struggled in practice with reads and timing.

Then, he went 6 of 9 for 63 yards in limited time against the New York Giants in his Jets debut - a solid start for the former Brigham Young star. In pre-season game number two, he lit up the Green Bay Packers defense, going 9 for 11 for 128 yards and two TD's. Not coincidentally, he looked much like his idol, Aaron Rodgers, But remember - this is preseason.

Then there's Lance, who wowed everyone with his 80-yard roll-to-the-left, throw-back to the right TD toss to WR Trent Sherfield in the 49ers' first preseason game against the Kansas City Chiefs.

Ultimately, he went 5-of-14 for 128 yards, one TD and four sacks in his eight possessions, which included 29 snaps.

In short, Lance's performance was filled with highs and lows, characterized by great mobility, a strong arm, poor decisions and a tendency to hold the ball for too long. That's par for the course, especially for a young quarterback who performed exceptionally well in college, albeit at the division two level.

Meanwhile Justin Fields - who was picked 11th overall by the Chicago Bears - has been impressive in the pre-season, showcasing a strong arm, excellent mobility and the ability to extend plays with his legs.

Predictably, he's forced some throws and taken too long to get the ball off, but that's normal for a young QB.

In New England, Mac Jones has shown the accuracy he was renowned for - as well as a lack of mobility in the pocket (which he is also known for).

And the number one overall pick, Lawrence, has shown that he has the potential to be a star in the league with a strong arm, deceptive mobility and poise under pressure. He's also thrown balls he shouldn't have, and taken sacks when simply throwing the ball away would have prevented lost yardage.

The upshot of all this?

Wilson will begin the season as the Jets' starter; that much is clear. Lawrence will likely start, but not before Gardner Minshew III has something to say about it.

And as impressive as Fields has been, expect Andy Dalton to begin the 2021 season as the Bears' starter.

Suffice it to say, these five young QB's have the tools to be stars in the NFL. However, they will have to refine their skills and gain experience before achieving star status.

Or, like Peyton Manning, go (literally) through the School of Hard Knocks before emerging on the other side as a premiere quarterback.

At the very least, it will be very interesting to watch each quarterback develop and see if they have the skills, savvy and fortitude required to earn stardom - and become a fixture in fantasy football drafts.

That status cannot be achieved in the preseason, because it is just that - a watered down version of the regular season. We will see what each pivot really has when teams start playing for keeps on September 9.