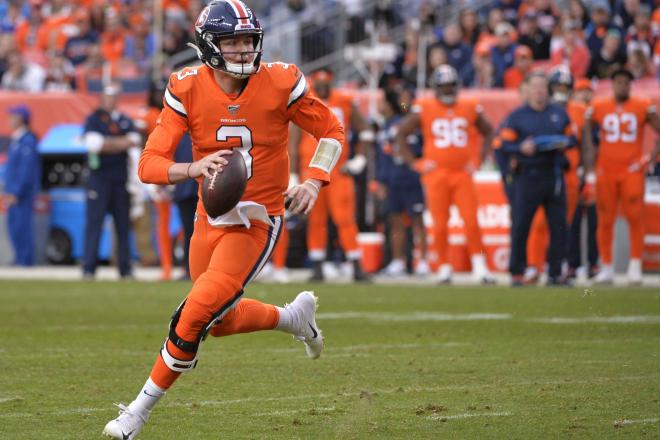 NFL: Three Quarterbacks at the Crossroads

As you may have guessed, those quarterbacks are none other than  New England's Cam Newton, Denver's Drew Lock and the Giants' Daniel Jones.

Here's why each pivot must get off to a strong start - and sustain it throughout the entire season.

Last season, Newton had several excuses for his spotty play, which saw him throw for just eight TD's.

He had limited time to prepare and form a chemistry with his receivers. There was the assertion (and a mostly correct one) that he had no receivers to throw to.

Then, he contracted COVID-19, and played poorly upon his return. Weak, inaccurate throws once again raised questions about the health of his arm and shoulder.

Well, that nightmare over, Newton is supposedly healthy. He now has four established targets to throw to in the form of tight ends Jonnu Smith and Hunter Henry and wide receivers Kendrick Bourne and Nelson Agholor.

Meanwhile, the Pats also selected QB Mac Jones 15th overall in the first round of the NFL Draft.

Should Newton falter, the former Alabama star will most certainly be given a chance to show what he can do behind center. Simply put, it's time for Superman to put up or shut up.

At times, he looks like a bonafide starter, showcasing exceptional arm talent and a penchant to extend plays to make something out of nothing.

Then, there are the times when he inexplicably throws into double or triple coverage, or tries to do too much and gets sacked for a 20-yard loss.

Clearly, the Broncos haven't given up on Lock. However, the addition of veteran QB Teddy Bridgewater has put the former Missouri standout on notice.

He must do much better than last season's stat line of 16 TD's, 15 picks and quarterback rating of 48.8. If he doesn't shine early and often, Bridgewater will be in and he will be watching from the sidelines.

Think about this: over the past two seasons, no player in the NFL has turned the ball over more than Jones, who turned it over no fewer than 39 times.

At the same time, he has alternately delighted and confounded Giants fans, throwing dimes to receivers - and then making ill-advised throws that have resulted in easy picks for opposing DB's.

To say the least, Jones - who admittedly was drafted higher than he should have been - has to start showing some maturity, starting with better decision-making.

The good news is that RB Saquon Barkley will be back, and that he also has more weapons at his disposal after the Giants beefed up their receiving corps in the off-season.

If he doesn't improve significantly - last year's 11 TD's, 10 interceptions and quarterback rating of 61.1 just didn't cut it - the Giants may be forced move on from Jones despite his occasional flashes of brilliance.