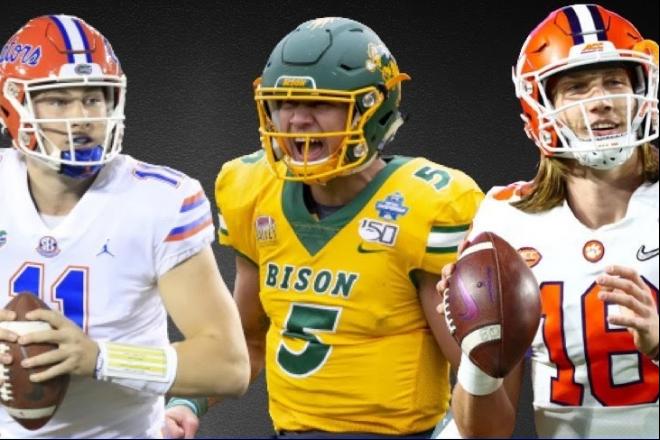 NFL: 2021 Draft Figures to be an Unprecedented Event

The 2021 NFL Draft is shaping up to be an unprecedented event.

That's because April 29 could mark the first time the first four picks are used to select a quarterback.

As things look right now, Jacksonville is a lock to take Clemson's Trevor Lawrence with the number one pick. The Jets are then expected to choose BYU's Zach Wilson with the second pick.

After that, things get interesting.

The San Francisco 49ers have shown interest in both Alabama's Mac Jones and Ohio State's Justin Fields. They're also intrigued by the boundless potential of NDSU star QB Trey Lance.

While Kyle Shanahan & Co. haven't come out and stated clearly who they'll pick, it is a certainty that they will choose a quarterback. For argument's sake, let's say they take Jones, who they've shown the most interest in to date.

Given that scenario, the Atlanta Falcons - who love Lance's upside - would then use the number four pick to take the NDSU standout.

From there, the next four picks belong to the Bengals, Dolphins, Lions and Panthers. Look for the Bengals to choose an offensive lineman (likely Oregon OT Penei Sewell); for the Dolphins to take a wide receiver (DeVonta Smith, Tua Tagovailoa's favorite target in Alabama); the Lions to take WR Ja'Marr Chase; and the Panthers to select TE Kyle Pitts.

That leaves the Denver Broncos at pick nine, which they would almost certainly use to take a flyer on QB Justin Fields. He has the upside to be a big upgrade on the inconsistent Drew Lock with the added dimension of mobility, and arm talent that's as good or better.

In all, there's a good chance that five of the top 10 picks will be quarterbacks. What does this mean in the grand scheme of things?

Well, the first thing is that both the Jaguars and Jets figure to be much more competitive in 2021 - the Jags because Lawrence is a polished, generational talent who can step in and play well right away.

In New York, Wilson will - unlike Sam Darnold - be surrounded by a competent coaching staff led by new head coach Robert Saleh. Wilson should have the structure needed to succeed, and a better cast on offense to work with.

Meanwhile, the 49ers and Falcons would have their quarterbacks of the future in place. Both Jones and Lance will have Jimmy Garoppolo and Matt Ryan to learn from, much as Patrick Mahomes had Alex Smith as a mentor in his first year in Kansas City. That's a great situation to be in as a young quarterback.

Out west in Denver, the Broncos would be getting a young quarterback with a chip on his shoulder.

Doubtless, Fields - should he slip out of the top-five as many experts have predicted - will be on a mission to prove that he can excel at the pro level. He will be hungry to learn and improve, and bent on challenging Lock for the starting position. That type of motivation usually translates into high performance.

At the same time, the Bengals, Dolphins, Lions and Panthers - all young teams - should also be improved. That's not to say they'll be dominant, but they won't be pushovers.

Burrow will have better protection, Tua will have another target to throw to, the Lions will create a new passing tandem in Goff and Chase, and Darnold will have a new favourite target in the athletic Pitts.

That means that established powers like Tampa Bay, Kansas City, Buffalo and Tennessee won't be able to rest on their past success. The young teams are coming, something that will make for a very interesting 2021 season.