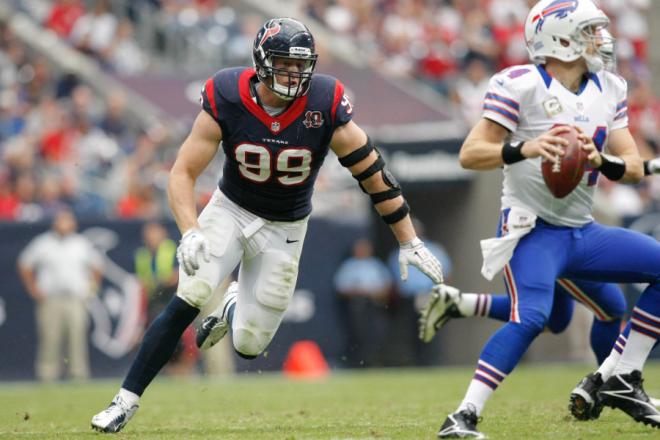 Even though we're only a month or so into the NFL's off-season, the make-up of team rosters is already starting to change.

Take the Arizona Cardinals, for example.

They just signed former Houston Texans defensive end J.J. Watt to a two-year, $31 million contract. No doubt, he was recruited by none other than all-world wideout DeAndre Hopkins, who the Cardinals acquired from the Texans last year.

On the downside, Arizona looks like they're going to part ways with DB Patrick Peterson. However, with every downside, there's an upside.

In this instance, it's a big one. With Hopkins and Watt in the fold, it's been rumored that QB Deshaun Watson might be interested in heading to the desert. However Cards' head coach Cliff Kingsbury loves his wee QB, Kyler Murray.

That said, this is Deshaun Watson we're talking about. Would Arizona ship off a second first-round QB pick (remember, Josh Rosen was traded away to make room for Murray)? The answer is probably yes. If they could find a way to acquire Watson, there's little question his ceiling is higher, as good as Murray is.

Now, they have no proven leader at QB with only Taylor Heinicke, Steven Montez and Kyle Allen under centre. Clearly, they're looking for an established quarterback. If they can't sign one, they might look like the Chicago Bears have over the years - a team with a great defense, but mediocre offense that always hovers around the .500 mark.

Speaking of quarterbacks, it looks as if QB Mitchell Trubisky won't be re-signed by the Chicago Bears. He could surface in New England as a reclamation project for Bill Belichick. Another candidate for the Pats' starting QB job might be Teddy Bridgewater, who could be a casualty in Carolina if the Panthers decide to draft a quarterback or acquire Deshaun Watson.

Meanwhile, other teams continue to let go proven players as they try to get under the salary cap.

The Giants just cut sure-handed receiver Golden Tate and David Mayo, who recorded 80 tackles just two years ago. The Lions are said to be getting ready to release DB Desmond Trufant, a fixture in their secondary for several years.

In Minnesota, the Vikings cut veteran TE Kyle Rudolph, a move that was both salary-related and prompted by the emergence of TE Irv Smith Jr.. The Saints also cut loose veteran tight end Jared Cook to open up salary cap space.

It's also looking like pending free agent QB Jameis Winston would like to stay in New Orleans if they two sides can come to an agreement that benefits both parties. It would make sense for the Saints to sign him, as he would give them the capacity to take deep shots again - something they couldn't do as Drew Brees' arm strength waned in recent years.

Long story short, the rosters of countless teams figure to change in a big way due to draft developments and salary cap issues. That could alter the balance of power in the league as we now know it, making it crucial to learn the new composition of the different rosters.

It looks like there will be a steep learning curve for fantasy players going into the 2021 season. More than any year in recent history, those changes are going to impact teams positively and negatively, seeing new powers rise and traditional powers fall.