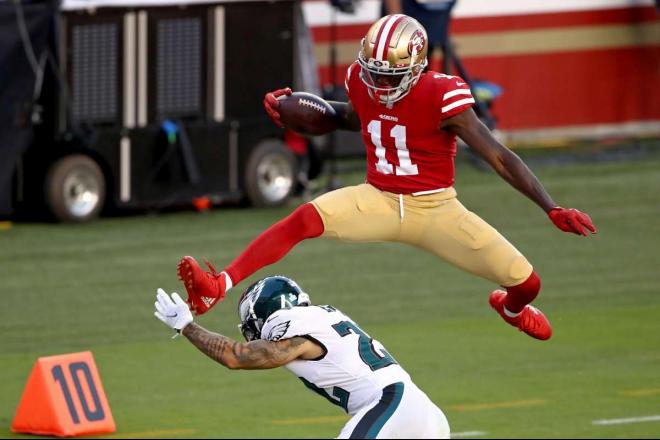 Written by Tyler Norberg
15 December 2020
This season has been wild from day one, as there was concern if there were going to be an NFL season or not. Now, we sit here asking ourselves, "Where has the season gone?", but this is when the fun starts. This is when the wins and losses really matter, and just like the 2010 Seahawks and the 2014 Panthers, it doesn’t matter what record you have going into the playoffs, just as long as you got there. With the excitement in the air and the smell of that trophy filling your nostrils, there was some disheartening news for some key players getting banged up this week. I’m here to help you make key decisions for this week, decisions that might possibly make or break the season. Here we go.

Opportunity
Kendrick Bourne WR4 (2% owned)
Brandon Aiyuk WR2 (69% owned
As a whole, the San Francisco 49ers just had an awful day. They lost to a team that didn’t even score an offensive touchdown and lost several key players on defense in the process, the big one being Fred Warner. The good news is that if you were worried about playing Aiyuk in the playoffs, you should be feeling pretty good right about now. Samuel once again hurt his hamstring and will miss the rest of the regular season. Nick Mullens has been playing decently and now has excellent matchups against the Cowboys, Cardinals and Seahawks. With Deebo out, Aiyuk becomes a must start. Mullens has also showed a decent connection with Bourne with him getting at least 3 catches in his last 5 games. Bourne is a high risk flex play against a weak Dallas secondary.
Miami Dolphins
Injury
TE - Mike Gesicki (O-Shoulder)
WR - Devante Parker (Q-Leg)
WR - Jakeem Grant (Q-Leg)
Opportunity
Mack Hollins - WR3 (0% owned)
Durham Smythe - TE2 (0% owned)
Lynn Bowden JR - RB3 (0% owned)
The Dolphins have been looking solid since the end of the 2019 season, but they lost 3 key players in their offense in Gesicki, Grant and Parker. Although Parker left early, Gesicki was enjoying a huge game prior to his injury that came late in the fourth quarter. With nearly all of his weapons either hurt or out, Tua still threw the ball 48 times! His top target with all the injuries was Mack Hollins who had nine targets for five catches and 66 yards. If Grant or Parker are out next week, and it's looking likely that both wideouts miss this game, Hollins is a very low end flex play, especially considering the matchup against the New England defense. Backup tight end, Durham Smythe could be worth a look in very deep leagues as well. He’s gotten praise form his coaching staff as a solid backup and has been involved in almost every game this season. If Gesicki sits out, Smythe could be a decent play in deep PPR formats. Lastly, Lynn Bowden could be a Hail Mary play. He lead the team with seven catches and was on the field a lot this week. Keep an eye on him, as he might be a solid play in a week where Gaskins is still out and the offense is missing their top three play makers.

Now more powerful than ever: The Machine - DFS Lineup Optimizer
Los Angeles Chargers
Injury
WR - Mike Williams (Q-Back)
WR - Keenan Allen (Q-Hamstring)
Opportunity
Tyron Johnson WR (0% owned)
Mike Williams has been the definition of hit or miss this year and now with this back injury, he could miss the upcoming Thursday matchup with the Raiders. Keenan Allen also got a little banged up and came out of last week's win over the Falcons with a hamstring injury. With the Chargers focusing on the pass, by way of Justin Herbert throwing the ball 44 times, the passing attack will still be in play even without the Chargers top weapons. This is the time for a high upside, high risk streamer in the name of Tyron Johnson. Johnson only has 12 catches on the year but with a total of 276 yards and 2 touchdowns! If either Allen or Williams sit out against the Raiders, Tyron is a sneaky and possible game changing flex play with his big play ability against a poor Raiders secondary. Keep tabs on Allen, as he was a non-participant in Monday's practice.
Denver Broncos
Injury
RB - Melvin Gordon (Q-Shoulder)
Opportunity
Phillip Lindsay RB (44% owned)
Speaking of hit or miss players, Melvin Gordon injured his shoulder and is questionable for next week's game against the Bills. That means that Lindsay should be picked up off waivers or dusted off benches and slide into lineups. He might be the right person to get you that playoff win, if Gordon can’t play then Lindsay is a low end RB2 or flex play. The Bills have been decent against the run all year but with Gordon out the work load alone for Lindsay is enough for the start. He should see 15-20 carries and might fall into the end zone to help you secure a clutch win.