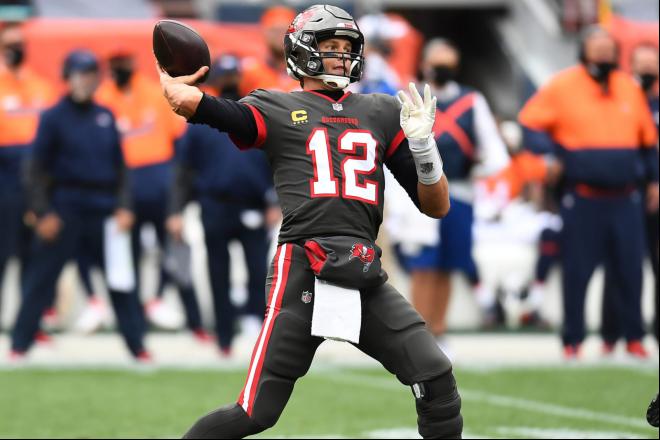 Tom Brady’s second act takes him to the Big Apple Monday night to take on the lowly Giants.  As if the double dose of NFC LEast action on Sunday night was not enough, we now must endure a bit more of it for MNF.  New York has just one win on the season and brings up the rear of the worst division in football, while Tampa Bay currently sits in a first-place tie with New Orleans in the NFC South.  The Bucs come in as 12.5-point road favorite and are the highest scoring team in the league to this point.  None of which bodes well for the New York Football Giants.  This game may be a dud on paper but that does not mean that there is not DFS value to be found.

I typically approach cash contests (50/50’s, double-ups, and Head to Heads) in one of two ways. In a match-up lacking a lot of potential production, I like to punt at one, sometimes even two spots.  However, you never want to make your punt at the captain position, and if you are brave enough to go for a punt at more than one of the flex positions, make sure you are getting some potential value in at least one spot.  Something to the effect of a WR that had been expected to play went down due to injury and then another wideout got Covid-19.  Now all the sudden there is WR 5, who was expected to see little if any on-the-field action who is starting the game out of nowhere and is priced at $600.  This allows you to get both of those players you were trying so hard to decide between rostering for the contest.

In an evenly matched contest with a lot of star power you must treat the captain position as if it is the pot of gold at the end of the rainbow . . . find it! You can either take a high price-range guys that has the potential to be the highest scorer on the slate (RB 1, WR1 or obviously the QB from the favorite) or free up some salary and go to the next tier looking for a breakout performance from a lower priced WR or even a team’s defensive/special teams unit.  The former is probably the safter option because in a cash game, if a super-chalky captain  flames out, then everybody else that has him is suffering the same fate and you can still beat them if you have better selections at the flex.

Tom Brady – The six-time Super Bowl champion is the most expensive player on the slate, but he is also projected to score more points than anybody else (funny how those two things seem to go hand-in-hand in DFS).  In last week's tilt against the Raiders, Brady was 33-45 for 369 yards and four touchdowns.  He did this without throwing an interception in his team's 25-point road victory.  On the season, the veteran has tossed 18 scores against just four picks and with just 90 more yards, will surpass the 2,000-yard mark in 2020.  Obviously, he is the safest play in at the MVP position in a cash game, but it will still tie your hands a bit when it comes to filling out the rest of your roster.

Daniel Jones - Quarterbacks usually garner a high salary, even bad ones.  Now who am I to say that one of the 32 human-beings gifted enough to start in the NFL at the most coveted position in football is bad? He must have done something right to get to this point, but things are certainly not going the best for the young Duke alum.  There are 28 other QBs with more passing touchdowns than Jones and 23 with more passing yards.  He did not have the worst outing last week in primetime against Philadelphia on TNF when he threw for two touchdowns and ran for 92 yards, but he also lost a fourth quarter fumble that directly resulted in the Eagles comeback victory. The fact that he is going up against the vaunted Buccaneers defense doss not help matters but if part of you thinks the Giants can pull off the upset here, then having Jones at the captain spot would certainly be a way to stand out from the competition.

Ronald Jones – Before the season began, all the talk out of the Bay Area was about the two-headed rushing attack that would Tampa would employ behind LeSean McCoy and Leonard Fournette, but it has been third-year running back Ronald Jones who has been the featured ball carrier for the Bucs so far in 2020. For a running back that never rushed for over 100 yards in a ballgame prior to week 17 of the 2019 campaign, he has certainly made the most of his opportunity this year.  The former USC Trojan has ran for over 100 yards in three of his last four contests, but the time he did not manage to hit the century mark was just last week against the Raiders he only registered 34 yards on 13 carries but did find the endzone to make a fantasy impact.

Mike Evans - I am not a huge fan of captaining wide receivers in cash games simply because you cannot guarantee how often they will touch the ball.  You know the rock will be in the quarterbacks hands every play, and that running backs are going to get their carries, but many factors come into a WR's production including the score of the game, the accuracy of the quarterback, and the scheme/coverage from the defense.  Evans does have a decent quarterback (see G.O.A.T.) throwing to him, but the injury to Chris Godwin would see Evans get even more attention from the Giants defense.   I do not like him at captain personally, but he has found paydirt in five of the team's seven games to this point, although not the last two.

Scotty Miller- With the added attention to Evans, this could be a breakout spot for Miller.  He is tops on the squad with 365 receiving yards and had over 100 yards and a score against the Raider last week.  He did have a hip/groin setback he dealt with throughout the week, but he has been cleared to play

Darius Slayton – Receiving touchdowns are awfully hard to come by against the Tampa Bay secondary.  As a matter of fact, there has been just one against the unit in their last three outings.  It is really a pick your poison type of thing if you decide to go with a Giants wide receiver here, with Slayton, Sterling Shepard, and Golden Tate all being amongst your options, but of the three, Slayton has been the most consistent of the bunch.

Leonard Fournette - The former Jaguar has been hampered by ankle issues but has been returning to form, to the point where last week he only had just two less carries than Jones last time out.  He also received five more targets than Jones and was on the field for 56 percent of the team’s snaps.

Rob Gronkowski – We all had to know it would be just a matter of time before Brady began to link up with his favorite target from New England.  The big pass-catching tight end had shoulder issues earlier in the week but has been cleared to go for MNF.  He has 22 caches for 280 yards and two touchdowns on the season, but the scores have come in the last two games and he is suddenly viable in fantasy again.

Team Units and Specialists – No matter the opponent, the Buccaneers defense is always a consideration, but against a one-win team that is struggling to find an identity, you can expect their ownership to be higher than normal.  The Giants defense is not really a consideration in this game unless you are just trying to throw something against the wall with the off-chance of it sticking.  With just a 45-point total for this game, it could mean a big day for kickers.  Logic usually says to go with the kicker on the team that is favored simply because he will be given more PAT opportunities, but as mentioned last week, logic usually goes out the window when it comes to kickers.  If you're going to roster a kicker for this contest, you can get Ryan Succop and play the odds he will outscore his counterpart, or you can save a bit of salary take Graham Gano and hope the Giants offense puts him in position to contribute.

Chuck Dowling is a University of Florida J-School alum that has been a print and radio journalist for over 20 years.  He has been playing the odds for just as long, and other than winning money, he enjoys nothing more than a premium cigar and a T-bone steak.  You can find him on Twitter @ChuckDowling

You can join Chuck's Discord, 'Merica DFS by clicking here