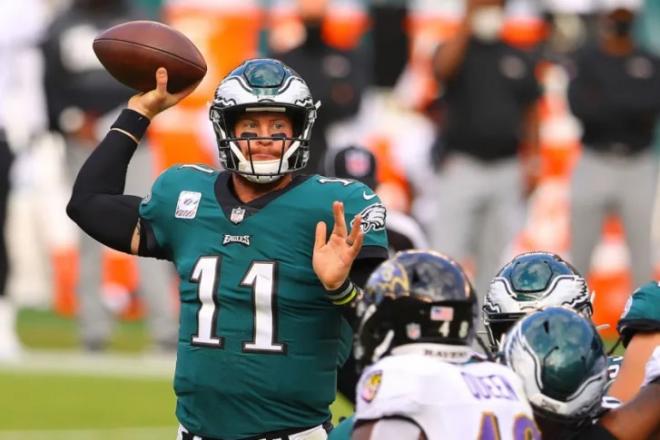 The Thursday Night Football schedule to this point this season has been just about as bad as 2020 in general.  This week’s offering is no different as we get an NFC LEast offering with the New York Giants (1-4) visiting the City of Brotherly Love to take on the Philadelphia Eagles (1-4-1).  While the two squads have only combined for two wins on the season, they are both within one game of the division leading Dallas Cowboys (2-4).

I typically approach cash contests (50/50’s, double-ups, and Head to Heads) in one of two ways. In a match-up lacking a lot of potential production, I like to punt at one, sometimes even two spots.  You never make your punt at the captain position, and if you are brave enough to go for a punt at two spots, make sure you are getting some potential value in at least one spot.  Perhaps something DraftKings missed when setting their salaries or did not adjust when a WR went down due to injury and WR 5, who was expected to see very little on-the-field action now becomes a tangible play. This allows you to get virtually every stud worth having as opposed to having to figure out which one you will not be able to draft.

In an evenly matched contest with a lot of star power you must treat the captain position as if it is flagpole at the end of a Super Mario Bros. level . . . it is life or death.  You can either take a higher ranged guy that has the potential to be the highest scorer on the slate (RB 1, WR1 or obviously the winning QB) and free up some salary or go for that obvious play that is going to be super-chalky.  The latter is probably the safer option because in a cash game, if nearly half the field is going to be captaining the same player, then obviously if he flames out, everybody else that has him is suffering the same fate and you can beat them with better selections at the flex.

Carson Wentz - Carson Wentz - The quarterback of what will probably be the winning team is usually a safe, if not chalky play at Captain. The North Dakota State alum carries the slates highest price tag but he throws the ball a lot.  That may be because his team is usually trailing, but at this point it seems safe to assume the Eagles have a pass-happy offense.  He turns the ball over a lot and does not throw many touchdowns.  Sounds like a dram Captain, right?  Unfortunately, in a match up like this one, he may just be.  The fact that he is top five in the league amongst quarterbacks at the rushing position does not hurt either.

Boston Scott gets the start for Philly with Miles Sanders ruled out of the game. His stats are really hard to justify using him at captain, but most of them have come from his being in a backup role and the Eagles may keep it on the ground a bit more in a competitive ballgame.

Devantae Freeman - With Saquon Barkley  out with his torn ACL, Freeman is again the feature back in the Giants’ offense. He has not set the world on fire in this spot and Dion Lewis is the better pass-catching spot but this really does seem like one of those games where the Under is in play and both sides will look to grind out a victory with three yards and a cloud of dust.

Daniel Jones - He is another top five quarterback when it comes to rushing yards at the position and comes in one spot higher than Wentz in that category. He is a bit of a turnover machine himself but if you are going to play this contest then you are going to have to choose somebody at captain. He does have some decent targets to throw to and may have a bit of confidence coming in after leading his team to their first victory of the season last time out.

Darius Slayton - I do not always avoid the wide receiver position at captain, but when I do, it is a game like this one. I honestly prefer players that I know are going to get a high volume of touches like the quarterback or RB1, but my favorite WR play for this game is Slayton. He had a coming out party in prime time in the Week 2 loss to the Rams and is the most targeted player on his roster.  He has three scores in five games this season and getting one in this game would make him a huge addition when points may be hard to come by.

Travis Fulgham – He comes into this game as the top target for Philadelphia and has three touchdowns in three games this season. While I do not love his odds to continue that trend, it certainly could happen. He should be considered as a value play as he is the first player listed here with a price tag under 9000 on DraftKings.  You typically want to avoid a 3-3 split of players from each team in a showdown so If the Eagles do win as expected, he has the potential to be the better play than Slayton.

Desean Jackson - His price is right on DK at just 5,800 but he is still coming back from a hamstring injury and we will not know what he has to offer until he steps on the field.

Other Options – As always, Kickers are in play for a showdown but you never really know what kind of fantasy production you will get. Their price (3,800 and 3,600 respectively) are basically signs around their neck saying “We might get you 12 points, we might get you two. Roll the dice if you would like.”  The common logic is you want the home kicker, especially if they are the favorite, but that is just something “they” say and conventional wisdom when it comes to kickers is rarely on the spot. The same can be said for each team’s defense/special teams units, but with the awful play at the quarterback positions in this contest, they could certainly be worthy plays. Just be careful, because their success means it is usually eating into a quarterback’s production, the same quarterback you may have on your roster, thus the two positions have reduced value because they are working against one another.