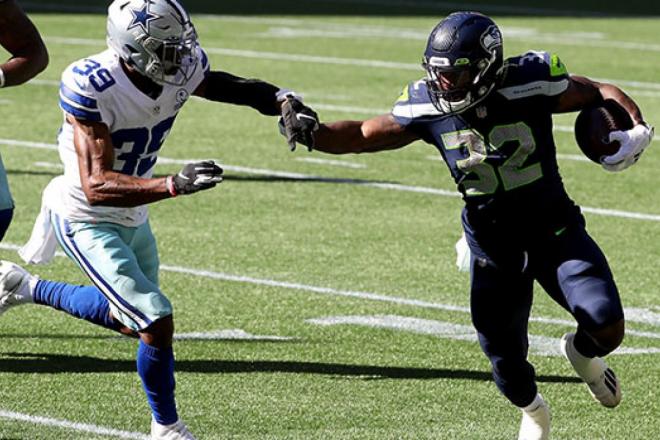 Wow, it’s already Week 4? Per usual, the NFL season is flying by and maybe even faster than usual because of our anticipation coming into this year. Right now, you could be at the top of the world sitting at 3-0, or contemplating switching sports because you are 0-3, contemplating that the season is over already. Well, I’m here to tell you that it’s still early in the season and anything is possible. I’m also here to tell you who to pick up after another week of notable injuries. Whether you are riding the coattails of fantasy success, or falling toward rock bottom, Week 4’s Injuries and Opportunities is here to enthuse your upcoming matchup.

After an absolute disgusting play from the Cowboys defensive lineman, in which he did a Gator roll with Carson’s leg, Carson was diagnosed with a sprained knee with no definitive timetable for his return. This puts Hyde in immediate flex conversion. He ran for his first 1,000-yard season in Houston last year and with him slated to get the bulk of the carries in upcoming weeks, you need to pick him up now. Even more so with the matchup against the Dolphins this upcoming week where the Seahawks will most likely be leading most of the game. Pending on how serious Carson’s injury is, you should think about stashing Homer as well. If Carson sits out for a while, Homer will see more carries and be the 3rd down back for the Seahawks garnering more targets from an MVP favorite in Russell Wilson.

Coming into this week Chris Godwin had already landed in the concussion protocol, now in his second week of action, Godwin is slated to miss several weeks due to a hamstring injury. Enter another solid flex play in Scotty Miller. Miller has been targeted 14 times in the first three games and is averaging almost 17 YPC (Yards-Per-Catch). Tom Brady loves his small slot players (i.e. Julian Edelman and Wes Welker.) If Godwin does in fact miss substantial time, Miller will be a flex play regardless of the matchup due to his uptick in workload. OJ Howard also could be a sneaky pickup. The big, athletic tight end already lines up all over the field and could be in line for more targets with Godwin sidelined.

With the league’s strict concussion protocol, Johnson could be out several weeks if not cleared. If that happens, the Steelers have a bit of a frenzy on offense. With Ben Roethlisberger finding his feet after missing all last season he looks to be back in form with 7 touchdown passes already this season. The Steelers will use this opportunity to play their young rookie wide receiver Chase Claypool more if Johnson can’t go. Claypool only has six catches on the year but he’s averaging an astonishing 25.1 YPC. James Washington and Eric Ebron will be good stream plays this week with the matchup against the Titans who are 24th against the pass so far this year. If you are really itching for a plug-in tight end, definitely throw Ebron in your lineup this week.

This week was pretty light on injuries, which makes all of us happy. I’ve covered all the major injuries that carry some of the bigger implications, but here’s a quick rundown of a couple more injuries and possible pickups for your team this week.

The Bears speedy scat back is out for the year with a torn ACL. This is good news for David Montgomery owners as he will get the bulk of the carries with no real RB2 to steal pass catching work. A fun pickup could be Swiss Army knife Cordarrelle Patterson who got four carries last week and has been used all around the field, he should get more carries with Cohen out.

Mike Williams' injury seems minor but he wasn’t receiving a big target share anyways with him only getting five targets in the last two outings. If Williams misses time, it’s only good news to Keenan Allen and Hunter Henry owners; I wouldn’t bother picking anyone else up from the Chargers receiving corps.

Now, John Brown’s injury is hopefully just as minor as it looks. I had Brown as a solid flex coming into this year and he didn’t disappoint through the first two weeks garnering 150 yards and 2 TDs. If he ends up sitting, look to pick up Cole Beasley who is owned in only 10% of leagues. He already has 20 targets this season and just posted a 100-yard game this past week. If Brown misses time Beasley will turn into a solid flex play in this high-powered offense.