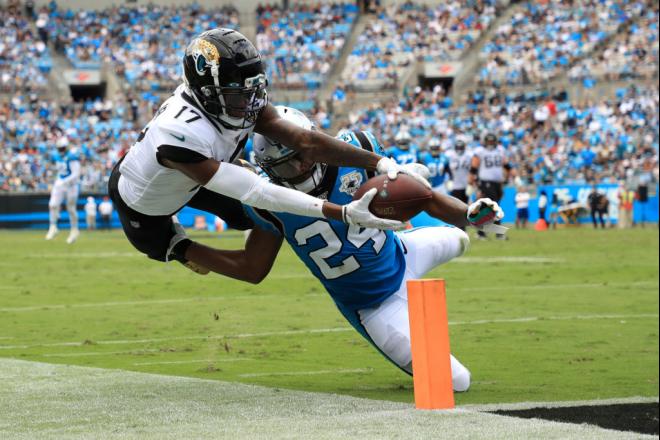 The season is almost here! Finally, oh finally. The World is ready for some football. This may be one of the most exciting and most unpredictable season of all time. With no preseason or even a real offseason, anything can happen this year. There is no doubt we will see a lot of new stars and surprise breakouts accrue throughout the season. With all this craziness and uncertainty, what better thing to do than make bold predictions? These are 5 bold predictions for fantasy football this season. If you have made some of your own bold predictions among friends, you can keep track of them with your own bet calculator.

5. DJ Chark will finish the year as WR10 or better

The Jags are pretty much the clear cut worst team in the league and they have no clue what they are doing on defense. On the offensive side, there are few solid pieces but with the departure of Fournette, the offense will be forced to revolve around Chark. He took the year-two leap and improved in essentially all categories and is poised for an even better season. He will be Minshew's number one target as he could see close to 10 targets a game. With Chris Conley, DeDe Westbrook and the addition of Laviska Shenault, Chark shouldn't be worried about facing too much double coverage and with his 6’4” frame, Minshew won't shy away from throwing up 50/50 balls to his big WR. The Jags most likely will have the first pick in next year's draft but it won’t be because of Chark after he finishes the year with 1,200 plus yards and 10 plus TDs.

From the outside looking in, people were shocked that the Washington football team cut Adrian Peterson. But if you look at Scott Turner's offense and what they want to do, AP just doesn't fit that mold. Now enter Antonio Gibson, a 3rd round pick from Memphis who only had 77 touches in his college career but averaged an astonishing 15.6 yards per touch. Gibson fits Scott Turners offense perfectly and Turner has even compared Gibson to Christian McCaffrey on how he wants to utilize him. Gibson played both WR and RB in college and he will be extremely versatile in this offense. The WFT ranked 32nd in passing yards last year and they can thank their spotty Oline for that. Turner will look to get the ball out of Dwayne Haskins hands quicker and into Gibson’s hands a lot, whether it be screen plays, draws or outside runs. Gibson is going to received a lot of touches, who will line up all over the field. He will catch at least 40 passes out of the backfield command the majority of rushes as the lead back in Washington. This offense might raise some eyebrows with their new addition in the backfield.

3. Lamar Jackson will finish outside the top 5

Lamar Jackson was absolutely phenomenal last year and there is no doubting that. What I am doubting is his ability to replicate it. Every decade or so there is a QB that comes out of the draft that is known for running, from Randall Cunningham and Michael Vick, to Robert Griffin and Cam Newton. As history shows, the NFL chews up running quarterback's careers (i.e. RG3.) The reason Cunningham and Vick lasted so long in the league is because they adapted their playing styles to last longer and became more efficient pocket passers. There is no doubt Lamar is talented and his head coach, John Harbaugh, knows this. They want him to last a long time, so look for Lamar to throw from the pocket more this season. Last year, Lamar became the second QB in history to run for 1,000 yards. The first person to do that? Michael Vick. After that year Vick played six more seasons and the most yards he ran for in a season after reaching 1k was 646 yards. Lamar is still a great QB1 this year, but I can't help but giggle at the people taking him in the second round of drafts.

2. DK Metcalf will be top 5 in receiving TDs

Last year was a stellar year for the then-rookie DK Metcalf and soon his value is going to skyrocket. He is an absolute athletic freak, standing at 6’4 230 and a 40-inch vertical. Last year he saw the most redzone targets of any rookie wide receiver and ranked 14th in the league with 17 targets. DK's teammate on the other side of the field, Tyler Lockett, actually lead the league in redzone targets with 23. Look for DK to take some of those away as Wilson becomes more comfortable with Metcalf. You also can’t forget about Metcalf's breakaway speed as he ran a 4.33 at the combine a year ago. With him developing as a deep ball threat and a serious redzone target, Metcalf is only going to get better and more reliable and that means you are going to see plenty more opportunities from the second year phenom.

1. Tom Brady throws for over 40 TDs to lead the league

This is a bold prediction to everyone besides Brady himself, who still believes he is in his prime. Brady hasn’t thrown for 40 touchdowns since 2007 when he threw 50 of them with arguably his best wide receiver core that included Randy Moss, Wes Welker and tight end Ben Watson. Now, 13 seasons later he has a good, if not better receiving corps. Mike Evans and Chris Godwin combined for 17 TDs last year and that was with Jamis Winston throwing them the ball, who also enjoyed targeting opposing cornerbacks half the time. Brady is also reuniting with Rob Gronkowski, who hopes to get back to Hall of Fame form. On paper, this is one of the best offensive units of all time. That’s a big step up for Brady’s playing days in New England when he was throwing to guys like Brandon Lafell, Deon Branch and several other journey men over the years. Brady, with top tier talent surrounding him, is going to be flinging TDs all over the place, which will make us consider if he is going to play for another decade.