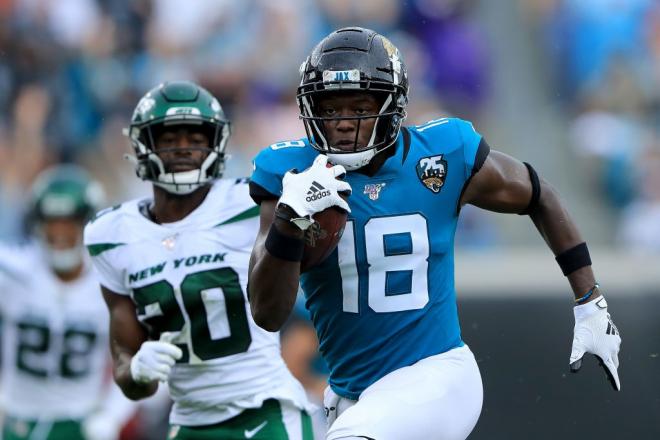 The 2020 NFL season is almost upon us and, although your fantasy draft may have already concluded, it’s never too early to look out for pickups on the waiver wire. Those transactions can make-or-break your fantasy campaign and we’ll now give you tips on three wide receivers that will likely be available and could propel you to the top.

The NFL pundits are not expecting a great deal out of the Jacksonville Jaguars this season after their underwhelming 6-10 record in 2019, being backed in the NFL odds on bet365 at +15000. Quarterback Gardner Minshew proved his quality in relief of Nick Foles enough to allow the Jags to move on from the latter in the off-season. Minshew developed a strong relationship with his receiving corps – especially DJ Chark and Conley.

Conley joined the Jags in 2019 from the Kansas City Chiefs where he was down the pecking order. However, he was utilised in the number two role behind Chark and performed extremely well in his first term. Conley recorded 47 receptions for 775 yards and five touchdowns in 16 games. The 27-year-old will only be better in his second season, while Minshew will have learned a great deal in his rookie campaign. Conley could break the 1,000-yard mark and surprise a few people around the NFL.

Kirk had a solid rookie season for the Cardinals in 2018 despite issues at the quarterback position. He built on those performances in the last campaign with rookie quarterback Kyler Murray. The 23-year-old recorded 68 receptions for 709 yards and three touchdowns. Arizona made one of the most significant moves of the off-season by trading for DeAndre Hopkins.

Hopkins is arguably the best wideout in the league and he will draw the attention of opposing defenses. Therefore there will be space for Kirk to exploit down the field. He has all the attributes to rack up the yards for the Cardinals, and has a brilliant tutor in the form of Larry Fitzgerald entering his 17th season in the league. Murray will also have improved greatly having studied NFL defenses for over a year now. It should allow Kirk to thrive in Arizona, and for fantasy players seemingly low value.

Perriman was a disappointment after being selected in the first round of the 2015 Draft by the Baltimore Ravens. He missed the entire 2015 season and was largely underwhelming in the following two terms before being released. Perriman failed to make much of an impact at the Cleveland Browns in 2018, but last year enjoyed a breakout season with the Tampa Bay Buccaneers. He notched 36 receptions for 645 yards and six touchdowns.

The 26-year-old became a favourite target of Jameis Winston. His success earned him a move to the Jets where he has the chance to build a rapport with Sam Darnold. Darnold worked well with Robby Anderson and now has a big target to connect with in the endzone, who also has the speed to make plays down the perimeter. Perriman has a chance to shine in New York and might just be under the radar enough for a waiver wire pick-up early or late in the campaign.