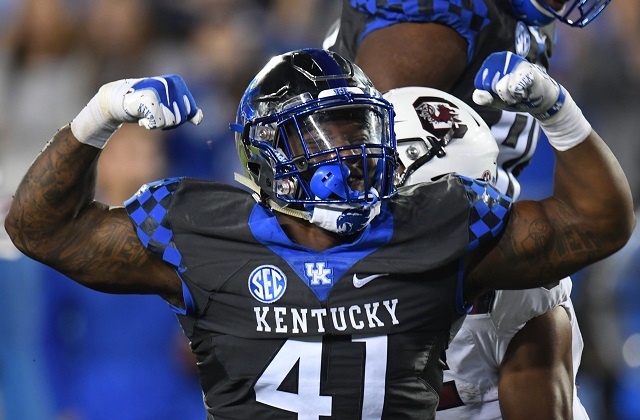 For those of you who play in an IDP league, and if you don’t you should, this draft is loaded with talent. I am sure that will be on display in Nashville come April 25th when draft night begins. Nick Bosa looks to be a top 5 pick, but if you can’t grab him there are alternatives, namely Kentucky DE/LB Josh Allen.

Listed as an “EDGE” player at the NFL Scouting Combine (can play DE and LB), Josh Allen looks to be a player that can step in day one and be productive for an NFL roster. Standing 6’5” and weighing in at 262 ibs (height/weight is official NFL Combine measurements), Allen spends almost as much time in the backfield as the opposing team's quarterback. One thing that stands out to me is his tackling ability. He is not a lazy hitter looking to wow Kentucky fans, he squares up the ball carrier and wraps him up while bringing him to the ground. A winner of the 2018 Bednarik (Top LB) and Nagurski (Top Defensive Player in NCAA) awards, Allen finishes his collegiate career with 220 combined tackles (42 for a loss), 31.5 sacks, 8 passes defensed, 1 interception and 11 forced fumbles. While there is only 1 interception, from what I saw, he is no slouch in coverage, as evidenced by his 8 passes defensed. Where he can use some work, however, is using his size to jam tight ends at the line of scrimmage, knocking them off their intended routes.

At the scouting combine, Allen showed his speed by blazing a 4.63 40-yard dash, which is amazing for a defensive player of his size, paired with 28 reps on the bench press, a 7.15 second cone drill and 4.23 second 20 yard shuttle. So as we can see, his size, strength and athleticism make him an elite defensive talent that got better in each of his 4 years at Kentucky:

So Mr. Allen appears to be like wine, getting better with age. I am extremely impressed with his 2018 statistics, amassing 17 sacks (#1 in SEC play) and earning SEC defensive player of the year. One thing we don’t need to worry about with Allen is the level of competition he faced on a weekly basis, as playing in the SEC you are going against superior competition on a weekly basis.

You can watch some Josh Allen highlights here https://www.youtube.com/watch?v=_HQyP1oG51U

On draft weekend, look to see where Josh lands. Although he is my #3 rated defensive prospect behind Ohio State’s Nick Bosa and Mississippi State’s Montez Sweat, he can make an impact very soon for your fantasy team.

Questions? Comments? Feel free to @ me on Twitter @Thembower85!