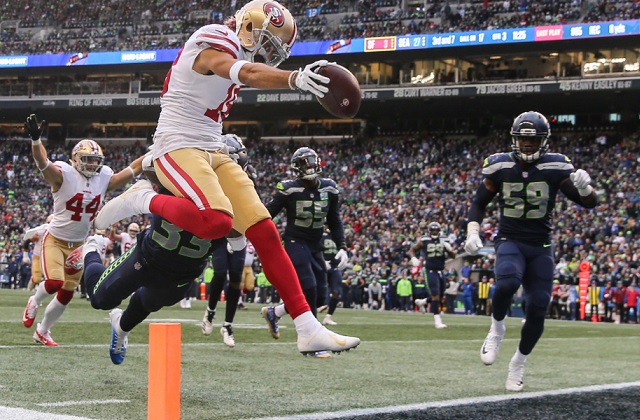 For years, the Bill Belichick and the Patriots have been trolling fantasy folks with the ever changing carousel of running back usage. James White had an unreal first half of the season, thriving as his backfield teammates were banged up. Just when you think the Patriots have a good thing going with White, Sony Michel and Rex Burkhead are thrown back in the mix taking away from White's greatness. It almost feels like the Patriots are out thinking themselves, take the last play of Sunday's game for example, when their safety (Rob Gronkowski) was unable make a game-saving tackle to prevent a touchdown. White still led the backfield in snaps played and will be a start worthy candidate in a favorable matchup against the Steelers who have struggled against passing backs this year. KEEP, start and pray the Patriots do what is best for them.

This Redskins offense is now a complete disaster, but you can't blame them, Darrius Guice, 2 QBs, 6 OL, Jordan Reed, and many other bumps and bruises have led to this collapse. Lucky for Josh Johnson, the 4th QB to start for Washington this year, they will travel to face top-5 defenses in Jacksonville and Tennessee. CUT Peterson and anyone still on your roster from the Redskins, their season is over.

(See Week 13) Need I say more? Okay I'll elaborate a little. ACQUIRE Dante Pettis who will face Seattle, the team he had 129 yards and 2 TD's on. Seattle may be out for revenge but Pettis has 7 targets in each of the last 3 weeks and 4 touchdowns. Pierre Garcon has been placed on injured reserve but that still leaves Marquise Goodwin and the surging George Kittle to keep the entire focus of the defense off of the rookie Dante Pettis who is a flex worthy option for Week 15.

So we picked up Spencer Ware before the Kareem Hunt news hit, right? Well now Damien William's is back in KC and provided immediate impact for his offense. Ware was banged up in the game and Williams came in and produced two touchdowns in the air and on the ground. Williams looked like the more agile and elusive back so ACQUIRE him for use in the flex or RB3 with high upside.