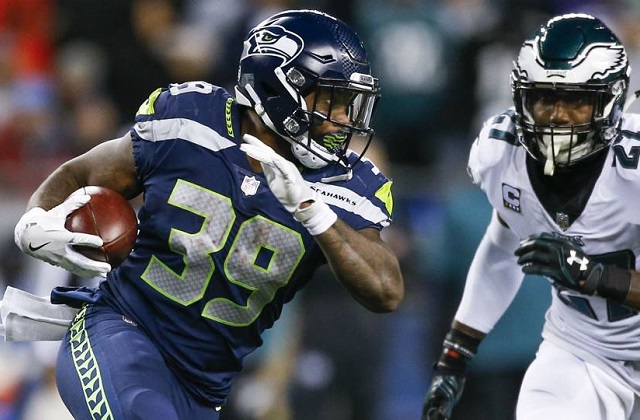 Herndon has become Sam Darnold's best friend. Even when Darnold threw four picks, Herndon came away with eight fantasy points. His last four weeks of scoring in PPR leagues look like this: 12, 12, 7.5 and 8. Herndon looks like a low-end TE1 to me and is currently owned in only 13 percent of ESPN leagues. That might not change much due to a hard matchup against the Bills next week and then a bye. However, you should add him as a bench stash.

Smith has really taken his opportunity to the next level, as he's scored in four of his last five games. Since Devonta Freeman was placed on IR, the Falcons have used a committee approach, with Smith seeing around 40 percent of the touches. Smith should gradually see that percentage go up, due to the fact he and Freeman will be the main backs next year and the coaching staff wants to evaluate his talent.  Smith is more of a flex play in standard leagues as his highest target total was four back in Week 4. I would add him in deeper leagues as a bench stash. He is currently owned in only 32 percent of leagues.

After Chris Carson went down, it wasn’t the first-round pick Rashaad Penny who took over, but Davis. Even when Carson was healthy, Davis was still seeing a nice number of touches also. This week he also showed that he could do a good job of catching out of the backfield, as he grabbed seven of his eight targets for 45 yards on top of his 15 carries for 62 yards. If Carson can’t play this week, I expect Davis to see the bulk of the workload as he did in Week 4, when Carson was out and he carried the ball 21 times. Davis is currently owned in less than 20 percent of ESPN leagues.

Humphries last-five game catch totals have been 6, 3, 4, 7 and 8, and he eclipsed 50 yards receiving in three of those five. His first and second touchdowns came this weekend, so that has not been a strong stat category for him. However, in PPR leagues, Humphries should easily be owned in more than the three percent ownership currently in ESPN. In all my 12 teams or higher leagues, I’m adding Humphries as a solid Bye week fill-in and I would say that he should be more consistent than DeSean Jackson per week going forward.