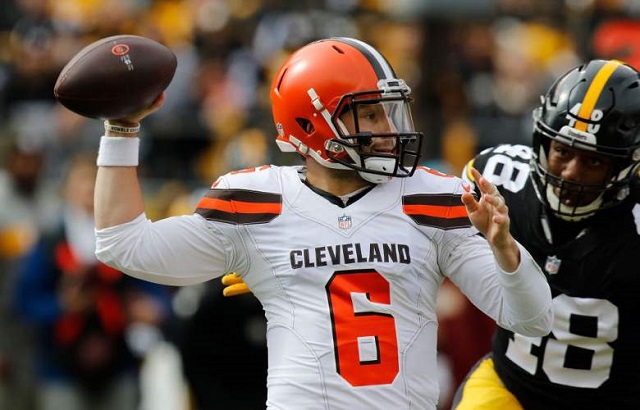 In a QB matchup for the ages, I’m riding with Brady versus Aaron Rodgers and the Packers. We’ve yet to see a dominating performance from him this season. He’s been solid all year as far as yardage; owners are just waiting for touchdowns to pile up. Look for New England to exploit the absence of HaHa Clinton-Dix and throw it over the top, early and often. In a battle of GOATs, ride with the rings -- start Brady!

Do you want a QB flier who can score you the big bucks? Look no further than Mayfield. Hue Jackson and Todd Haley are out in Cleveland, and Patrick Mahomes is coming to town. This has been a highly anticipated matchup ever since Mayfield was named the starter after Week 3. The last time these two were on the same field, they combined for 1,279 yards through the air and 12 touchdowns in a college game. Mayfield can be a risky play, but perhaps a coaching change and more freedom to cut it loose will help the rookie signal-caller put some big numbers up.

Last week, Peterson surely looked like the “All Day” we’ve seen in years past. Peterson faces off against a Falcons which has surrendered nine rushing TDs through seven games and an average of 4.8 yards per to opposing running backs. In addition to a favorable matchup, Peterson has averaged 25 carries over his last two games, giving him more than enough opportunities to hit pay dirt. Start AP and watch the money roll right in.

Look, this is an absolute value pick. Miller has eclipsed 100 rushing yards in consecutive games after a disappointing start to the season. It appears the Texans' offense might have figured it out, as evidenced by the 42 points they scored last Thursday versus the Dolphins. Picking Miller could make your day as you are able to flex your salary in other spots while not sacrificing points.

I really can’t stand games where two incredible offenses meet on turf. Why do I hate these games, you ask? Because I always bet the over (it's 60, by the way) and whenever it seems too easy, it usually is. But not this week, baby. This week, we may see a combined 100 points. So why buy Cooks? The Saints have allowed 27 passes of 20 yards or more, which fits right into what Cooks does best. Also, look out for a revenge game as he makes his second return to New Orleans since being traded in 2016.

Fitzmagic is back, baby! Too bad some of that magic doesn’t rub off on the Tampa Bay defense. The Bucs have been awful on the defensive side of the ball this season. They’ve allowed 20 receiving touchdowns, and it doesn’t look like that will get better anytime soon. Funchess has yet to surpass 100 yards receiving in a game this season, but look for that to change this week. With value like this, you should take advantage.

At a very thin position, Olsen is a great play against the Bucs. With a score in each of his last two games, Olsen has shown to be the same reliable option for Cam Newton after missing three games due to a foot injury. The Bucs are the second-most generous defense to tight ends in fantasy, allowing more than 14 DraftKings points per game. Bet on Olsen having a breakout game Sunday.

This seems obvious. Nathan Peterman is just … bad. The Bears have been less than impressive since their Week 5 bye, but I’m anticipating a big bounce-back performance here. They are worth their high salary.

Are the Bears a little too rich for your taste? Roll the dice with the Ravens in a divisional matchup against Ben Roethlisberger and the Steelers. Ben threw just two touchdowns and turned the ball over five times in previous divisional matchups on the road versus the Browns and Bengals this season. If you’re looking for money to spend elsewhere, pick the Ravens' defense.