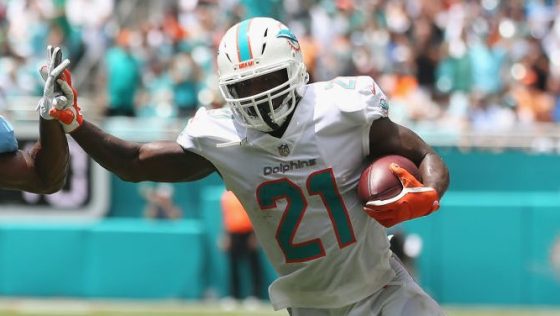 Coming out of a Week 5 bye, most analysts thought Ronald Jones would take over the Buccaneers' starting RB gig. Well, all of them were wrong. Barber kept the job and had his best game this year, rushing the ball for 13 times for 82 yards and adding four catches for 24 yards and a TD. Yes, I would consider Barber an early-season bust, but I don’t see him losing this job. Barber out-touched Jones 13-1 on Sunday and out-targeted him 4-3. Grab Barber for your RB3 slot as he’s owned in only 43 percent of ESPN leagues. That low percentage is likely from fantasy owners dropping him during the bye.

I wrote about trusty ol' St. Gore a few weeks back, but it seems that many people didn’t go out and grab him as his ownership is still less than 15 percent. As I said before, Gore is reliable when he gets touches, which he did Sunday. Gore outpaced Kenyan Drake in the carries department 15-13 and gained 101 rushing yards to Drake's 57. Even though Drake was more involved as a receiver, out-targeting Gore 6-1, I expect Gore to see more work going forward.

Beasley leads the Cowboys with 35 targets this season. He turned 11 targets Sunday into nine catches for 101 yards and two scores. Beasley has been Dak Prescott's top wideout this year, and after blasting through one of the best defenses in the league, hopefully the Cowboys have found their spark on offense and can keep it going. Beasley is currently owned in a measly 8 percent of ESPN leagues. Put a claim in for this poor man's version of Julian Edelman.

Everyone thought Howard would miss at least a couple of weeks with a sprained MCL and that Cameron Brate would be the tight end to target with Jameis Winston back. However, Howard played Sunday in Atlanta and out-targeted Brate 4-1. They both recorded a touchdown and caught every ball that headed their way, so we’ll negate those stats. Howard finished with 62 yards on the day and as the weekend's TE11 in PPR leagues. If you are in a 12-team league, he is the perfect pickup and is still out there in about 60 percent of ESPN leagues. Add him up before his breakout game.

With Devonta Freeman out, Smith has really become a threat, In Week 6, he out-carried Tevin Coleman 11-10 while each saw two targets. Smith has also scored three weeks in a row now. He may not be getting much yardage in every game, but his touchdown upside makes him a FLEX play, especially in deep leagues or as a bye-week fill-in. With Freeman expected to miss Week 7, work should keep flowing Smith's way. His ESPN ownership is at fewer than 15 percent; I expect that to shoot up soon. If you follow me on Twitter or listen to the Dynasty YAC podcast, you’d know I’ve been high on Smith since he was drafted in the fourth round this spring. I thought he wouldn't be a fantasy factor until next year when Coleman is no longer on the Falcons' roster, but the rookie has announced his presence sooner than expected.

(As of Tuesday afternoon, Freeman is now on IR.)