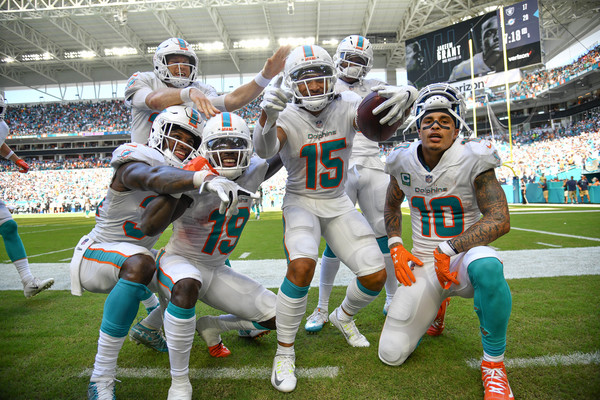 week, I bring you five top-priority wavier adds as well as players to watch.

My favorite has been named the starter for the Browns in Week 4. If Thursday night's game was any indication, Mayfield is set to show why he was the No. 1 overall pick. I think Mayfield on the field benefits every Browns skill-position player. I'm treating him as a QB2, but he's definitely someone I want on my bench as he could break out at any point. Mayfield is owned in only 6.8 percent of ESPN leagues. In other words, he's out there and he should be on your teams.

Boyd has scored in back-to-back games and went for 132 yards Sunday. In the past two games, his stat line is 12-223-2. The Bengals travel to Atlanta in Week 4. The Falcons have given up more than 800 yards and six TDs through the air in the first three weeks. Not only that, but A.J. Green went down with a groin injury Sunday. He says he won't miss time, but if he does, Boyd becomes the Bengals' No. 1 WR. Boyd is owned only in 2percent of ESPN leagues.

Allen has scored a rushing touchdown in each game thus far, but the pass-catching specialist finally added a receiving TD on Sunday. Despite his scoring prowess, he is currently owned in just 39.3 percent of ESPN leagues. Alex Collins is still the clear leader in this backfield -- he out-touched Allen 21-9 in Week 3 -- but I'm looking to roster Allen for his red-zone and PPR upside.

Wilson hasn't taken over the Jarvis Landry role for Ryan Tannehill yet, but he has scored in consecutive games. Wilson also threw a TD pass on Sunday to Jakeem Grant. Though his catch and yardage totals haven't been the best -- only five receptions with 111 yards through those two games -- he has made good with the TDs. Wilson is currently owned in a scant 2.5 percent of ESPN leagues. I think he can be a back-end flex play.

It's Grant, not Wilson, who has actually filled the Landry role for Tannehill, leading the team with 14 targets. On Sunday, he scored twice, catching one TD each from Tannehill and Wilson. You should add Grant this week before he has another great performance and is gone. Grant is owned in only about 1 percent of ESPN leagues.

OTHER NAMES TO WATCH

If Jay Ajayi misses any more time due to his back injury, Smallwood becomes an interesting speculative add.

QB Josh Rosen and Kirk have always wanted to play football together -- they have been friends since high school -- but have never gotten the chance. That changed in Week 3 when Kirk was the target on three of Rosen's seven throws.