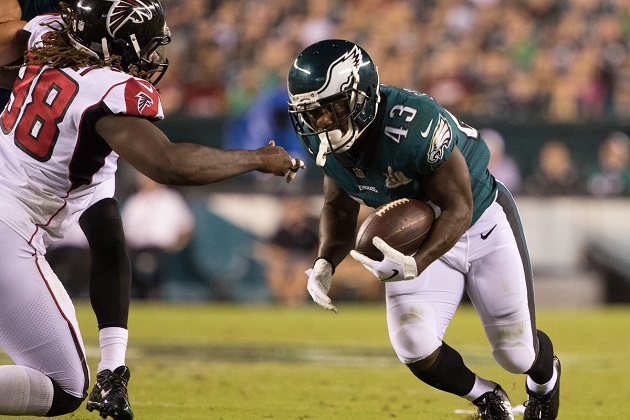 Many fantasy leagues will be won by owners who find those diamonds in the rough before all others recognize them. Here is a list of a few guys who many may not be premier waiver-wire pickups but just might be the type of player who helps you on your championship run.

Samuels was a four-year letterman at North Carolina State where he played running back and tight end. The 2017 fifth-round draft pick quietly sits behind James Conner and ahead of Stevan Ridley on the Steelers' running back depth chart. Last year for NC State, Samuels totaled 1,000 yards from scrimmage, averaged more than 5 yards per carry and scored 16 touchdowns (four receiving and 12 rushing) All this with Nyheim Hines, now with the Indianapolis Colts, in the backfield too. The 6-foot, 225-pound Samuels surprised by running a 4.54 40-yard dash at this year’s Combine. With Le’Veon Bell so far a no-show and no idea when he will report, the Steelers look to be all-in with Conner to replace him. Samuels is an injury away -- or perhaps a couple more fumbles from Conner away -- from being the starting running back for the Steelers. If you have the roster space, he is a "what the heck?" waiver add to take a chance on.

I do admit that last Thursday night’s kickoff game showed us Jay Ajayi is the lead back in Philly, and he should be! But take note that Ajayi and Sproles both played 29 offensive snaps. Sproles also was third on the team in targets and receptions with seven and three, respectively. Sproles also had two red-zone carries. Sproles was the Eagles' leader in running back snaps last year before his Week 3 injury. By the way, you should recall that from 2014 to 2016, Sproles was a top-30 RB in PPR scoring. I think he is a great add as an RB3 or flex.

He looked good spelling Marshawn Lynch in Monday night’s game. Richard tallied 24 yards rushing on only five carries, but he had a very noticeable role in the passing game. Richard caught nine of 11 targets for 55 yards. He was clearly more active than Doug Martin and definitely the best Raiders RB on passing downs. In a PPR league, not only is he worth rostering but a repeat of these reception numbers make him flexworthy right now!

Thomas is a rookie who averaged 15 yards per catch at Indiana last year. He probably was not expecting to get a lot of work sitting behind Greg Olsen; then Olsen re-fractured his surgically repaired foot Sunday. Now, Thomas is the Panthers' starting tight end and has an opportunity to contribute in Olsen’s absence. Give him a look if you're already scrambling for answers at TE.