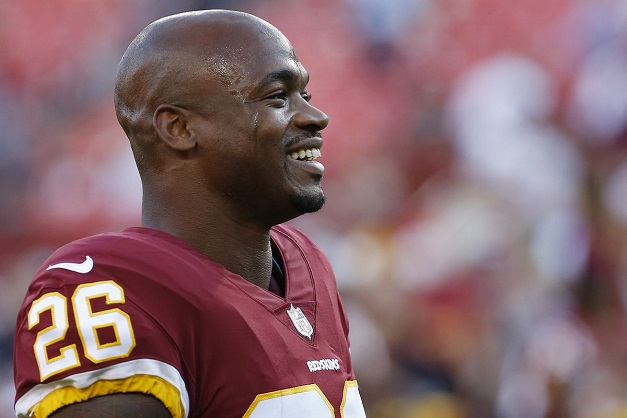 Yeah, he looked pretty good last week. AP ran the ball well and got yards after contact. But you can't watch him and think you are looking at 2012 Adrian Peterson. It's 2018, he's now 33 years old and has played just 13 games over the past two seasons. That's who Adrian Peterson is now. We need to remember the Washington Redskins picked him up after they lost Derrius Guice to a season-ending knee injury and then saw Samaje Perine and Byron Marshall pick up ankle injuries. Not to mention that Chris Thompson is coming off a broken leg and said he doesn't think he will feel 100 percent until November. Peterson is a late-round flier, but I saw him coming off the board in the 11th and 12th rounds last weekend. Pass on him anywhere close to that price range.

To win your league, start by winning your draft.
Draft Analyzer can make you a champion! New in 2018 - full sync to all leagues!

This seventh-round pick from 2015 has been the lead pass-catching tight end for the Jets this month. He got a Week 17 start last year and responded by catching five of eight targets for 74 yards. Maybe that is why the Jets watched Austin Seferian-Jenkins leave for Jacksonville and re-signed Sterling instead. Ironically, Sterling started his career in Jacksonville -- as a wide receiver. That natural pass-catching ability has been evident during the preseason.

Sterling's 6-foot-4, 258-pound frame sets him up well be a quality catch-first tight end Also, don’t they say a tight end is a rookie quarterback’s best friend? Sam Darnold should think so. Sterling is worth a late-round pick in deep leagues.

Reports out of Philly say Alshon Jeffery is expected to miss at least the first two games of the regular season. What does this news mean for the Eagles' passing game? Ostensibly, Nelson Agholor would assume the No. 1 WR role but he has missed practice since Aug. 6 due to a lower-body injury. How in shape and game-ready is he going to be once he returns? Mike Wallace presumably would be the No. 2 WR, but he was brought in to replace Torrey Smith, right? Do you recall Smith’s stat line from last year because I could not; I had to look it up: 36 receptions, 430 yards, two touchdowns. I would project the 32-year-old Wallace to produce about the same as Smith did.

Let me introduce you to Shelton Gibson. He bided his time as a rookie last year, and coaches have said he has impressed in camp. The West Virginia product has also had a great preseason and looks to be in a prime position for snaps beginning in Week 1. I do not know how many snaps that will be, but I do know when opportunity and talent meet, positive results are bound to happen. His situation is so intriguing to me.  If you pass over Gibson during your draft, at least look for him on the waiver wire.