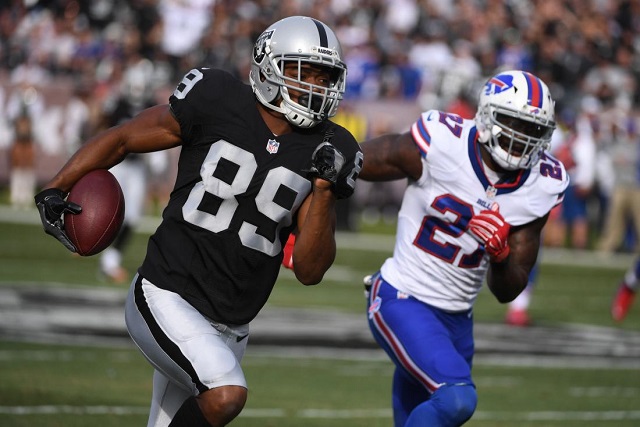 As you play fantasy football longer and longer, you seek out as many sources of information that will give you that magic edge. And as you know too well, that edge is critical to winning a championship. One pertinent theory pertains to the "Stud RB" we have been discussing of late. Another theory concerns third-year wide receivers. These tenets have been handed down over the last 30 years or so like two of the 10 commandments that Moses brought down from the mountain. They are, for the most part, considered by everyone as valid. To question these teachings creates cries of heresy from traditionalists.

Here I have taken the past three drafts (2013, 2014 and 2015) where the players have now completed three seasons. Listed below are the top five wideouts selected in each draft followed by their first three years of output.

What you see is sort of a mixed bag of results. I gave 10 of the 15 WRs a passing grade. That means they are playing at a WR2 level at a minimum. Remember that these were all high draft choices, and five of them have failed to reach that level thus far. With about a 67 percent success rate, we see that number as being very close to the average success rates for other positions.

One point that really stands out here is that eight of the 10 players who reached the WR2 level pretty much showed their pedigree early on. The only two who used three full seasons to develop were DeVante Parker and Nelson Agholor. We can conclude from this three-year sample that the Third-Year WR Theory applied to two out of 15 players.

I would hardly call that a validation of the theory. In my opinion, wide receivers develop at about the same rate as players at other positions. So, when you see a list of possible breakout WRs entering their third season, look at it for what it is: a calculated guess at best. Some of these guys will succeed and some will not.

In this game, the most important thing to remember is to develop your own reliable sources of information. Seek sources that give you more than supposed conclusions. Make sense of the numbers. In the end, use your gut. It is your team. Never rely on someone else to tell you what to do. Make the decisions and own them. In the end, you will become an expert at this game.

With just about three months until training camps open, buckle up for the journey. My colleagues and I at Advanced Sports logic are intent on helping you become the champion you want to be. Between our top-rated software and our poignant articles, we will be with you for the 2018 season in its entirety. What happens then? That, my friends, is easy. We start over and do it all again in 2019!

Rookie draft information for 2013-2917 is from NFL.com. Stats are from the FanEx Experts’ league records for 2013-2017 at the league’s site managed by MyFantasyLand.com.

Never miss ASL’s latest fantasy sports news. Join our mailing list. Send us an email at and at This email address is being protected from spambots. You need JavaScript enabled to view it. and list the sports you are interested in (NFL, NBA, MLB, NHL, EPL) to start receiving ASL’s newsletter.