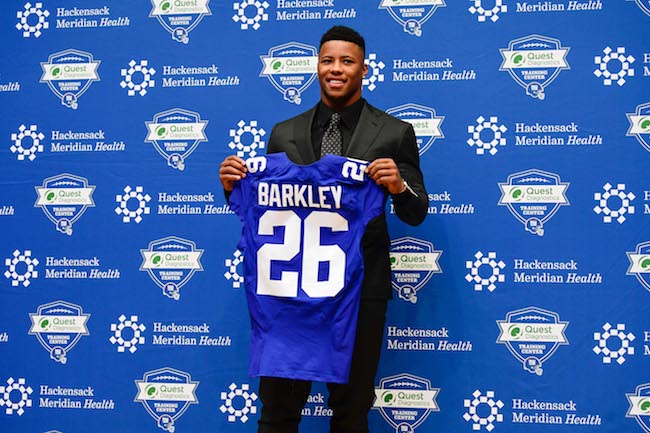 Scientists have debated the cause of the dinosaurs' extinction for many, many years with no common consensus. The same non-consensus has been reached by the fantasy football community over the past decade or so regarding what happened to the Stud RB. A few weeks ago, I addressed this very issue in my article, “The Return of the Stud RB.” I believe that stud RBs are on their way back to playing a prominent role in fantasy football.

On Thursday night, when Roger Goodell announced the Giants' selection of Saquon Barkley with the No. 2 pick, the wheel of chance was spun one more time. Stud RBs have just not been as common as they had been a scant few years before. In fact, in the last 30 years, the only RB taken with the No. 1 overall pick was Ki-Jana Carter. He answered the challenge with a forgettable seven-year career in which he started 14 games. He only gained 1,613 combined yards and scored 21 total TDs. BUST!

Over the last 10 years, the performances of the top drafted RBs have been pretty poor in general. Certainly, there have been productive, stud-like RBs selected later in just about every season, but the judgments of GMs and the talking heads have been dismal. Once again, this is a historic look at the past. From this review, we can tell how successful these top-drafted RBs usually are. Oddly enough, many RBs selected a lot later often do a better job. Let’s get right into it: Here's a rundown of the first-drafted running backs from the past decades of drafts.

Granted, some of these players were OK in their own right, but being the first running back drafted, a lot more was expected. The only ones near that stud status are the last three, Gurley, Elliott and Fournette. Now the jury is out on Barkley. Five years from now, what will we all say? Dud or stud?

There are just about three months until training camps open. Buckle up for the journey. My colleagues and I at Advanced Sports logic are intent on helping you become the champion you want to be. Between our top-rated software and our poignant articles, we will be with you for the 2018 season in its entirety. What happens then? That, my friends, is easy: We start over and do it all again in 2019!