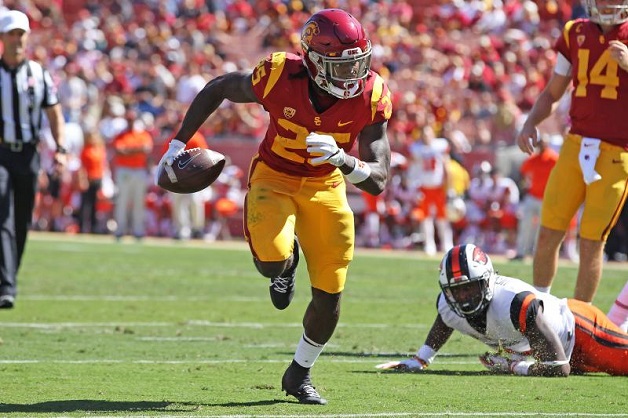 2018 is moving fast. Already we are less than a week away from the NFL combine. It is important for dynasty owners to stay engaged this time of year. No matter when your rookie draft is held, draft prep should be happening now.  Dynasty owners should be preparing their data and refining their preferences to find target players in their rookie drafts. They also should be comparing these preferences to the dynasty community in whole so get a feel where they have to maneuver to acquire these players. It is still very early in the process. The NFL combine, college pro days and the actual NFL draft will adjust player perceptions all along the way. It is better to set your board now and adjust as you receive more information about the rookies. While you never want to draft by ADP (average draft position) since drafting by average draft position will result in an average team, it is good to get a barometer of what they dynasty community is thinking of the prospects and to compare it to your draft board. This can help the dynasty owner find value and target players. It also can give insight if you overlooked an aspect of a rookie prospect and maybe you need to adjust your ranks or look closer at them. Remember your dynasty team is exactly that. This is your team. In the end, you will make the selection, not ADP, Mel Kiper, Mike Mayock or me. If you feel strongly about a player despite what ADP or the experts say go for it make the draft pick or set him where you think he belongs on your draft board.

Heading into the NFL combine this weekend, here is a way too early look at rookie ADP. We do not want to read too much into ADP at this point as it can be widely variant. We want to take note of the player names and where they are drafted in a general sense. By this I mean we want to note if the player is drafted in early, mid or late round one or round two. Any discrepancies of our own draft board then cause us to ask the question: "Is what I am accessing correct?" or "Is there something in the player's profile we are missing that should force me to move him up or down my draft board?" There is too much data missing to give a final rank to any rookie although we can build a draft board in a broad sense of what a rookie is and how he relates to the other prospects. We can refine the board as the draft process moves along.

When you are looking for ADP this early in the year you need to make sure that the data you are finding is for your current season. A quick web search brought up FantasyPros.com's ADP but unfortunately, the data was from 2017. I did find FantasyFootballCalculator.com with updated ADP information. It allowed me to sort ADP by rookies and is a first look at the data. The results were mock drafts and with them, you can find some owners experimenting to see how a draft will play out if they vary their responses. This sort of draft you can find increased variance. As expected the number of drafts was low and no player was drafted more than 15 times. Saquon Barkley, who for dynasty purposes has been recognized almost universally as the 1.1 of rookie drafts, was not the most drafted. He was drafted seven times. In fact, Ronald Jones holds that distinction with being drafted eleven times. This is a little concerning and makes us question the data. The website does explain that only human drafted player data was compiled. If someone joined a mock and timed out or quit whoever was drafted by a computer was not added into the data. For these reasons, when looking at the data what we really want to look for is how high or low a player was drafted. This gives us a feel for where the drafting community values a prospect. The top results were as follows:

The results show a nice distribution of running backs and wide receivers. They are mixed in as I would expect. James Washington showing over Courtland Sutton was a surprise and I will watch that ADP battle after the combine and through the entire process. Josh Rosen’s 1.04 drafting has me wondering if that owner was drafting for a superflex or QB premium league. Kalen Ballage being drafted at 2.05 at the earliest in this ADP data set suggests he can be a value come draft day and is worth monitoring as well. The notable name left off the list is Sony Michel. He is receiving a lot of buzz at this point and actually, I am anticipating he ends up drafted in round one of rookie drafts. This is concerning and reinforces that this data set could be fallible.

I personally prefer to use MFL.com. My Fantasy League is one of the top web hosting services for dynasty leagues with many customizable options. They receive a lot of traffic over the offseason and hold many rookie drafts. The ADP data they give is sortable so you can sift by rookies only as well as sort out mock drafts to get actual draft results. This is what you really want when looking for ADP data. When it is time for an owner to make an actual pick who do they choose. Unfortunately this early sorting out the mock draft results on MFL nets no ADP data so as of now we must include both actual and mock draft results. MFL results were as follows. MFL has a format of pick selection as opposed to round and pick.

This data shows the top of the first round as top-heavy with running backs. I doubt a draft would go five running backs and then quarterback with Baker Mayfield. At least one wide receiver would be mixed in this group.and the high point that the wide receivers in this ADP report were drafted suggests this. It does confirm that this years draft class strength is running back. Nick Chubb is also lower than expected. I have him number two on my draft board although I expected the community to have him ranked at number three or four in their rankings. At this point in the process, the ADP on Chubb appears to be a value and he a target player in the early to mid first round. I expect the four quarterbacks on this list to drop as time moves on. Superflex leagues did skew the results. The internals of the report show that two of the three leagues that were in the results were superflex mock drafts. This explains the high showing of quarterbacks and you can expect them to drop down in the results in time. As the process moves forward there will be more results and we will be able to filter out the superflex results. Baker Mayfield tops the results and not a prototypical quarterback. I can not say that I disagree with this. The case for Baker Mayfield is for another time. The data point is telling you that if you do not have Baker Mayfield on your radar, then you should look at him.

Again it is way too early to draw a lot of information from ADP results. It does give us some early insight into draft preparation for who to look at and as a quick check for are we on a solid path in our player evaluations. Remember your draft board, draft targets and draft picks are exactly that: yours. While ADP and experts can help you come to a conclusion of what is best for your dynasty roster, it is your roster and you make the choices. Use these things as tools to help you get to the best decision possible but do not take them as cold hard fact.