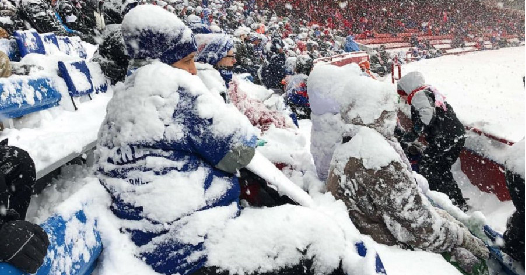 Story of the weekend right here: Carson Wentz went down for the season with a torn ACL. Before he went down, he was playing MVP-caliber football yet again, throwing for 291 yards, four scores and an interception. Torrey Smith was eating up all the yards and had his best day since joining the Eagles, catching six targets for 100 yards. Jay Ajayi finally took over the backfield, taking his team-high 15 rushes for 78 yards.

Jared Goff looked good in this game, but it didn’t translate to a win. Goff lost a fumble but threw for 199 yards and two scores. I have written for three weeks now about Cooper Kupp and his value without Robert Woods in the lineup. This week was Kupp’s week as he caught five of seven targets for 118 yards and a score. This game script had Todd Gurley written all over it, even though the Eagles have the No. 1 rush defense. Gurley rushed 13 times for 96 yards and two scores. He also caught three of five targets for 39 yards. Sammy Watkins has now scored in three straight weeks, but his 21 receiving yards were disappointing.

Takeaways: With Wentz done for the season, many of you fantasy owners will be looking for a replacement QB for the playoffs. My QBs to consider would be Jacoby Brissett, Blake Bortles, Jimmy Garoppolo and maybe check to see if that guy named Aaron Rodgers may have been dropped. Alshon Jeffery and Zach Ertz will take a hit in value going forward. Look for Jeffery to be a mid-range WR2 and Ertz to be a borderline TE1. I can see head coach Doug Pederson drawing up a lot of plays for Ajayi and LeGarrette Blount going forward to hide Nick Foles' weaknesses.

The Rams travel to Seattle in Week 15 to take on a Seahawks team that is coming off a bad loss (more on that later). Woods will probably return for that tilt, but I wouldn’t have the highest confidence in any Rams player absolutely killing it in Seattle. Look for it to be another Gurley game.

Antonio Brown should be the frontrunner for MVP right now. On Sunday night, Brown caught 11 of 18 targets for 213 yards but couldn’t find the end zone this week. Through 13 weeks, Brown has 99 receptions, 1,509 yards and nine TDs, putting him on pace for his best season to ever. Ben Roethlisberger threw an incredible 66 times and completed 44 of them. He ended up with 506 passing yards and two scores. I told you a few weeks back that this Ravens matchup was the only one I feared for the Steelers. Well, look for Big Ben to finish the fantasy season as a QB1 these next three weeks. Le’Veon Bell, once again, was on that "Winsday" mentality. He recorded at least 100 yards from scrimmage for the fifth straight week. Bell rushed for 48 yards and two scores on 13 carries and caught nine of ten targets for 77 yards and another score.

Alex Collins could have had a huge game, but was vultured by Buck Allen twice at the goal line. Collins still managed to have a great day as he rushed 18 times for 120 yards and a score. He added 46 yards on two receptions. The Ravens had the answer to this game but just didn’t ride Collins enough in the fourth quarter. Mike Wallace led the team in receiving yards with 72 yards on three catches.

Takeaways: New England comes to Heinz Field next for a shootout between the top seeds in the AFC. You’re starting all the Killer Bs. Just dropping this fact: The Steelers are 8-0 since Bell dropped that "Winsday" single. My personal pick to win the AFC, the Steelers will beat the Patriots in a close, down-to-the-wire game.

Collins could very well lead your team to a fantasy championship if he keeps playing like he did Sunday. This week, he does play the Browns, who have had a decent run-stopping defense. I think his skill set is capable of making that game a shootout too.

The Jaguars remind me of a recent team that was built on defense, went to a Super Bowl and absolutely dominated in that game. I’m talking about the 2013-14 Seahawks. Blake Bortles is a game-managing QB that relies on a strong defense. On Sunday, Bortles threw for 268 yards and two scores. Dede Westbrook was heavily involved in the game, seeing a team-high eight targets. He came down with five for 81 yards and his first NFL score. The Jags' other rookie wideout, Keelan Cole, caught all three of his targets for 99 yards and a touchdown as well. Rookie sensation Leonard Fournette also had a big day against a tough run defense as he rushed 24 times for 101 yards and a score.

Craziest stat I heard all weekend: Russell Wilson accounts for 82 percent of the Seahawks' offense. That is absolutely insane. Seattle needs to do something about that this offseason. Overhaul that O-line and give Wilson time to throw to his playmakers, Doug Baldwin, Jimmy Graham and Paul Richardson. Wilson showed in this game how much he really does, throwing for 271 yards, three TDs and three INTs while also rushing five times for 50 yards. Mike Davis took over the backfield this week, rushing 15 times for 66 yards, but he did leave in the third quarter with a rib injury and never returned.

Takeaways: The Rams and Seahawks will be going at it this Sunday, but we know how well the 'Hawks play at home. Look for Graham to have a bounce-back performance.

Jacksonville will host the Texans in Week 15. The Jaguars' defense should feed in this game as it looks like T.J. Yates will start in place of Tom Savage, who sustained a concussion Sunday and had a scary reaction on the field after taking a hard hit. If you play in an IDP league and there are Jags on the wire, I would look to invest in them. However, the only Jacksonville player on the offensive side of the ball I would rely on would be WR Marqise Lee or possibly Bortles if you need to replace Wentz.