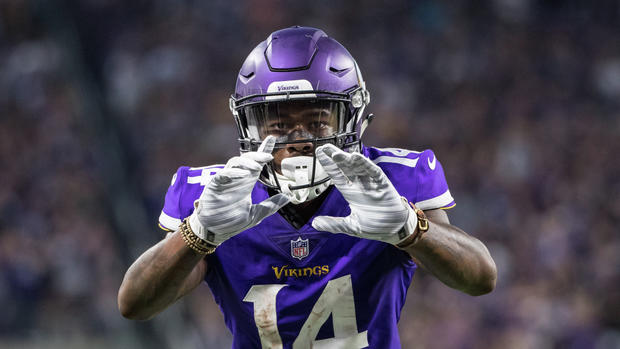 Keep that playoff train a-rolling, and get a heads-up on your competition with this latest edition of Keep, Cut, Acquire.

Case Keenum has developed great chemistry with WR Adam Thielen, which has hindered fellow receiver Stefon Diggs' promising upside. However, Diggs has two great matchups coming up against Cincinnati and Green Bay. The Bengals' defense has struggled against speed all year, most recently against Antonio Brown, Tarik Cohen and Kendall Wright. Thielen should have the tougher matchup of the two this week against a more physical corner in Dre Kirkpatrick. That could leave the middle of the field wide open for Diggs to do plenty of damage Sunday. KEEP Diggs and have no fear of starting him against the sudden vulnerable Bengals defense.

The Jets have now lost Josh McCown for the season, which opens the door for two young and unproven quarterbacks. Bilal Powell has done very little recently while splitting work with Matt Forte. The Jets' already struggling ground game will face a lot more eight-man fronts with their new QB situation. Powell is simply unusable for the next two weeks versus the Saints and Chargers. CUT Powell as well as Forte. There should be better production available on the waiver wire.

The Lions' running game has once again been hot and cold in 2017. Ameer Abdullah has been a disappointment and close to a bust for the Lions since being drafted in 2015. He sat out the past two games with an injury, but the Lions' ground game hasn't missed him much as Tion Green and Theo Riddick have both picked up the slack for Ameer. CUT Abdullah since he no longer has a main role with the Lions and shouldn't sniff your lineup in the fantasy playoffs.

You may have heard about this guy named Aaron Rodgers. Well, by the end of Tuesday, we should know a lot more about his status for Week 15. The Packers came from behind Sunday and in doing so, they kept the Browns winless, kept their own playoff hopes alive and kept our fantasy hopes for Rodgers alive. It is simply a must that you check your waiver wire for Rodgers and ACQUIRE him. Nuff said.

Seattle has found something with Mike Davis doing the heavy lifting in the 'Hawks backfield. Davis had a tough matchup this past weekend against the Jags but will now face the Rams, who have allowed the third-most fantasy points to running backs. ACQUIRE Davis and keep an eye on his injury status for this week as he was unable to finish Week 14 because of a rib injury. If he plays, he will be a solid flex option Sunday.

We don't usually expect Blake Bortles and the Jaguars to put up 30 points against the Seahawks, but the depletion of Seattle's defense opened doors for the Jags' passing game and that certainly included Dede Westbrook, who tallied five receptions for 81 and a TD. The aforementioned rookie receiver has averaged eight targets over the past three games. He will now face a Texans defense that is vulnerable to the big play followed by a meeting with the 49ers in Week 16. The outlook is promising for Westbrook. ACQUIRE the shifty wideout for a spark in your playoff run.