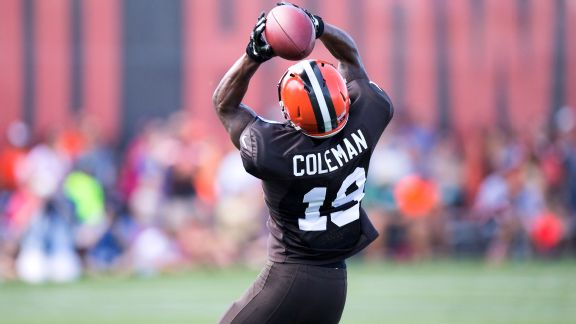 Finding a team's No. 1 wide receiver available on the waiver wire coming into Week 11 is a rare occurrence in fantasy football, but Corey Coleman is the exception to the rule. Cleveland’s top pass catcher broke his hand way back in Week 2 but is primed and ready to go for his desperate team. Coleman should be a priority add this week even though his Week 11 matchup is nothing short of a nightmare with the top-rated Jacksonville Jaguars' pass defense coming to town. So, don't plug Coleman directly into your starting lineups this week, but the Browns' schedule eases up considerably after Jacksonville.

You NEVER know what’s really going on with the Patriots' running back situation, but it appears Rex Burkhead has overtaken Mike Gillislee on New England's depth chart. Gillislee was a healthy scratch against the Broncos and Burkhead took full advantage by rushing 10 times for 36 yards and catching three balls for 27 yards and a score. Burkhead has now registered double-digit fantasy outputs in back-to-back games and his snap count continues to rise each week.

With Packers RB Aaron Jones out for the foreseeable future due to an MCL injury, fourth-round rookie Jamaal Williams is the next man up in Green Bay. He took over the Packers' backfield when Jones and Ty Montgomery went down Sunday, rushing 20 times for 67 yards against the struggling Bears. With Aaron Rodgers also missing in action, the Packers are a run-heavy offense by default and Williams is their main weapon now. Williams has a juicy Week 11 matchup against a Ravens team that has not been able to stop the run for most of this season. If Williams plays well, he might be worth keeping on your fantasy roster for the rest of the year.