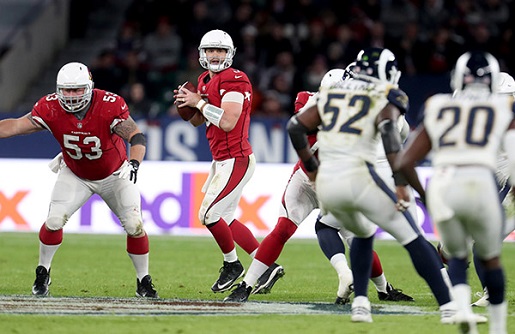 The Injury Rundown from Week 7

Dark days are ahead for the Cardinals' offense. Not that Palmer has been the reincarnation of circa 2008 Kurt Warner, but the downgrade from Palmer to either Drew Stanton or Blaine Gabbert is still drastic. With Palmer sidelined for anywhere from four to eight weeks due to a broken left (non-throwing) arm, Stanton is going to get the first crack here once the Cardinals come out of their bye. He's just bad. Stanton has completed slightly more than half of his passes and has been credited with more turnovers than touchdowns in his seven-year career. He started one game last season and although he completed six passes, including two TDs, to Larry Fitzgerald that week, I think Fitz falls into the WR3 range with Palmer out. The Cardinals' ancillary wideouts -- John Brown, J.J. Nelson, Jaron Brown -- are dart-throw WR4s. And with no reason for opposing defenses to respect Arizona's passing game, Adrian Peterson is going to see a lot of stacked boxes behind a subpar offensive line. There are no positives to take away from this injury. Everyone here loses fantasy value.

The Dolphins won Sunday after trailing by 14 points in the fourth quarter. But it wasn't Cutler who led the comeback; it was Matt Moore. And it looks like Moore will get at least one start under center after Cutler suffered multiple cracked ribs during the third quarter of that game. The switch from Cutler to Moore isn't as big as the one I just talked about. Moore might even become Miami's starter for the rest of the season if he can give a good performance Thursday versus the Ravens. Moore, since he is less of a gunslinger than Cutler, probably won't send as many targets downfield to Kenny Stills or, when healthy, DeVante Parker. Instead, I expect the former Carolina Panther to pepper Jarvis Landry with passes. The slot man is a strong WR2 in PPR leagues with Moore calling the shots.

Murray suffered a bruised shoulder Sunday, but it doesn't appear as if the injury will cause him to miss any game action. As such, the Titans' backfield will continue to be an unreliable source for fantasy points. Murray is the preferred option over Derrick Henry right now, but the veteran will only be a mid-range RB2 when the Titans return from their Week 8 bye.

Wallace took an elbow right to the earhole during Sunday's loss to the Vikings. His helmet flew off and his unprotected head then bounced off the U.S. Bank Stadium turf. The result was a concussion for Wallace and a one-game suspension for the assaulting party, Vikings safety Andrew Sendejo. Wallace actually argued frantically with his coaches to let him back in the game, going so far as to search through the team's equipment chests for his helmet, which had been taken away by team trainers. This week, time is not on his side as the Ravens will visit the Dolphins on Thursday. He was able to go through some practice on Monday and Tuesday, which is a good sign. But it's uncertain whether he will play in Week 8. With Jeremy Maclin dealing with a shoulder problem, the Ravens' receiving corps is awfully thin and probably not worth recommending for your lineups.

Although Martavis Bryant wants out of Pittsburgh, the Black and Yellow might actually need his services greatly in Week 8. Smith-Schuster, who has scored in two of the past four weeks and isn't as good as Bryant, according to Bryant, is currently in the league's concussion protocol. As such, his chances of playing this weekend versus the Lions are completely opaque. Might this cause Bryant to finally be fantasy-relevant? I was a huge supporter of his in the preseason, but he's done so little since Week 2, I'll say no. If JuJu is inactive, it might just mean Antonio Brown will see 25 targets instead of 15-20.

Walker came within inches of catching not one but two touchdowns Sunday. The first chance was an underthrown ball at the goal line that Walker may still have caught if he hadn't slipped in the end zone. The second was a deep shot down the right side that was batted away at the last moment. To add injury to insult, Walker suffered a bone bruise to his right ankle during overtime and was on crutches following the win at Cleveland. He will have Tennessee's Week 8 bye to rest up.

The most accurate kicker in NFL history, Bailey will reportedly be out for several weeks due to the groin strain he picked up in Week 7. The Cowboys have signed Mike Nugent to be his temporary replacement, so give him a whirl if you want. Bailey has made all of his field goal attempts this season, but he's only been given seven tries. That's why he ranks as fantasy's No. 21 kicker right now. Feel free to drop him.