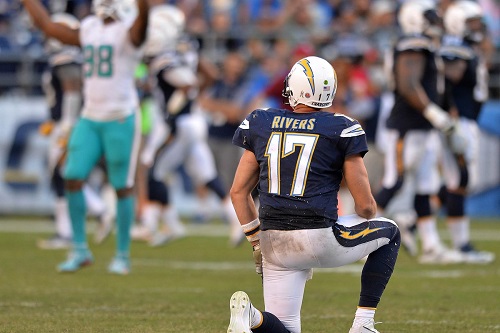 My Fantasy Bust of the Week belongs to 35-year-old Philip Rivers, quarterback of the former San Diego Chargers. Sure, the Chargers have pieced together back-to-back wins, but the Broncos are visiting Rivers and company this week, and Denver is in a BAD MOOD. After being humiliated by the winless Giants in Week 6, the No-Fly Zone will be in full effect against the Chargers. Rivers completed 25 passes last week for 268 yards and a score, but don’t expect a repeat this week against the Broncos. There are better quarterback options out there.

I’m sorry to be the one to tell you this, but Redskins TE Jordan Reed is washed up. Vernon Davis is out-snapping and out-producing Reed on a week-to-week basis, and it looks like the injuries have finally gotten the best of this beaten and old-looking 27-year-old. Although spectacular at times, Reed has always been made of glass and hasn’t looked healthy at all during the 2017 season. His best game of the season came during Week 2 when he caught six balls for 48 yards on the road against the Los Angeles Rams. This week, the Redskins are in Philadelphia and matching up against a very generous Eagles pass defense. But until Reed gets healthy, he needs to be on your bench.

While Jets running back Bilal Powell hasn’t practiced all week, Matt Forte is struggling with turf toe as his team travels to Miami to take on the Dolphins. Forte had his best fantasy outing of the season last week against a dismal Patriots defense, rushing nine times for 22 yards and catching eight balls for 59 yards. However, the Dolphins' run defense is a much stronger unit, making the banged-up Forte a very risky start for fantasy owners.