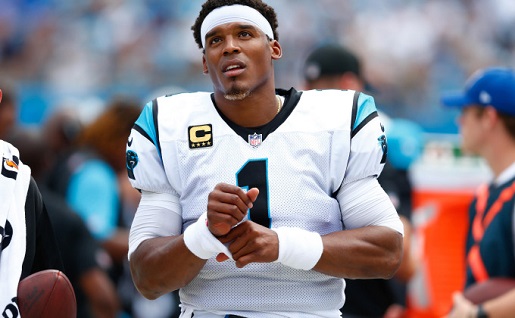 Except for a Week 2 matchup against the Kansas City Chiefs, Eagles WR Alshon Jeffery has been downright average since the beginning of the season. Philly QB Carson Wentz is feeding him targets, but Jeffery is NOT turning them into fantasy numbers. To make matters worse, the Arizona Cardinals and Patrick Peterson are coming to town and that’s bad news for Jeffery owners. Peterson and the Cards' defense have basically shut down every No. 1 wide receiver in the league this season. So if you are hoping that this is the week that Alshon finally gets his act together, you should NOT HOLD YOUR BREATH.

Panthers QB Cam Newton had a great Week 4 performance against a suspect Patriots defense, but things have been going downhill since then. Cam insulted a female sports reporter earlier in the week and could fall back to earth during his Week 5 road matchup against a rugged Lions pass defense. Yes, Newton completed 22 of 29 passes for 316 yards and three touchdowns last week, but his fortunes could change quickly against the Lions, who have pretty much bottled up Carson Palmer, Eli Manning and Matt Ryan. Newton looked terrible during his first three games of the season before coming to life against New England. He is a very risky start this week.

Just like Newton, Bengals QB Andy Dalton registered a great Week 4 performance against a very bad pass defense, carving up a lackluster Cleveland defense for 286 yards and four touchdowns. The problem is that the Bengals will host a strong Bills defense in Week 5 and that's bad news for Dalton. The surprising Bills are 3-1 on the season and are leading the charge with their defense. Dalton was downright awful early in the season and should return to his losing ways against Buffalo.