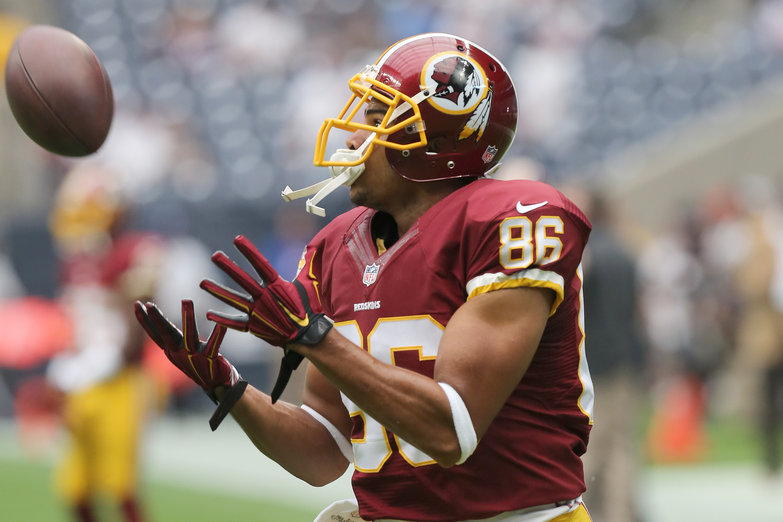 Fantasy Football: Why drafting a top TE can win you a championship

In just about any standard fantasy NFL draft, there's a pretty established top three at the tight end position followed by a group of good players who are clearly separated from that upper echelon. The Patriots' Rob Gronkowski is a late first-round pick on average (in 12-team leagues). The Redskins' Jordan Reed comes off the board in the third or fourth round, with the Panthers' Greg Olsen getting called shortly thereafter. That's fairly cut and dried.

I have always subscribed to waiting on tight ends, with varying degrees of success. I want to stock up on running backs and wide receivers in those opening rounds before taking a solid TE later on. However, it's clear that such a strategy can significantly decrease my chances of winning my league. I know this thanks to The Machine -- which is pretty cool, if you haven't heard already -- and ASL's founder, Leonard LaPadula.

Leonard recently traded for Reed in one of his dynasty leagues. He paid a pretty penny to get him and is left with the Bills' Charles Clay as his backup. Leonard will be looking to upgrade his No. 2 TE during his draft, but in the meantime, he wanted to find out if the move he made for Reed was actually the right one. Would it have been more advantageous for him to draft two middle-of-the-road-but-still-worthwhile tight ends like, say, the Jaguars' Julius Thomas and the Colts' Dwayne Allen? Or is he better off now with his stud-dud duo?

So, he loaded an empty 12-team league into the Machine and input pairs of tight ends onto each team. The team with the best tight end, Gronkowski, was given the the 24th-best TE as a backup. The team with the second-best tight end, Reed, was given the 23rd-best as a backup, and so on. The Machine ran the numbers, and the latter question above was the right answer, definitively. Here is the breakdown, ending with each pair's championship win probabilities:

Feel free to quibble with the rankings -- almost everybody has Olsen ranked third at the position, and the inclusions of Tye, McDonald and Clay may be a reach -- but understand that such changes would provide a negligible adjustment to the percentages. The study's overall trend line would stay about the same.

The results show that taking Gronk and a bottom-feeding backup raises your title odds by about two percentage points when compared to drafting a lower top-10 TE and a stronger second fiddle. There's also a fairly large gap between the Reed pairing and those directly after him, suggesting that Leonard did indeed make the right move.

The lesson here is that it's statistically beneficial to be aggressive with the tight end position early in your draft. And if you miss out on a Gronk, Reed, Olsen or Walker, then you should definitely step back and wait while focusing on top NFL players of other positions. As the Machine shows us, your odds of winning your league with the No. 5 tight end -- Kelce -- and the No. 12 -- Witten -- are almost identical, and there aren't meaningful percentage differences found between that range.