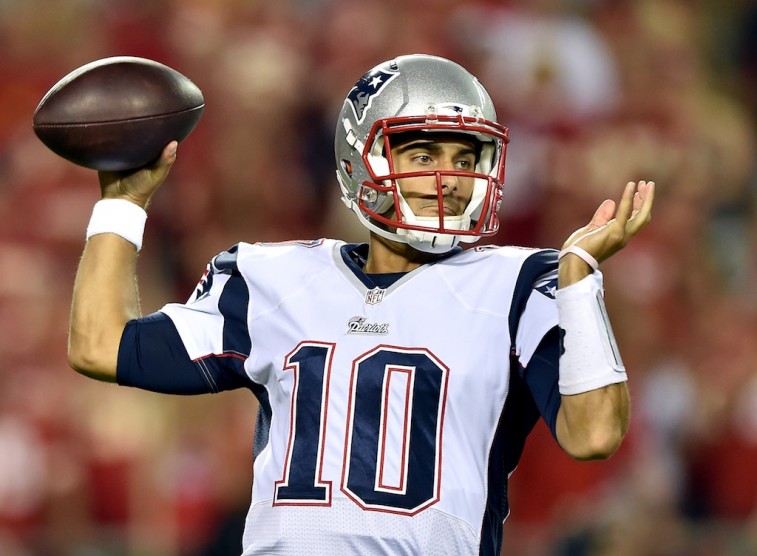 What this ‘Jacksonville prepping for Garoppolo’ article completely overlooks is the fact that the Jaguars coaches had Jimmy Garoppolo for one full week at the 2014 Senior Bowl. They got a preview of Garoppolo like no other team could last pre-NFL Draft, and could have drafted him…but they butchered their franchise, yet again, by selecting Blake Bortles instead of Garoppolo. The Jags totally whiffed on a player who is on the short list for top fantasy sleeper picks.

Of course, as I said days ago, the narrative on this (when Garoppolo succeeds as Brady’s replacement to start the 2015 season) will be how Belichick ‘makes’ QBs. Everyone in football analysis has a vested interest in making sure Garoppolo is not a talent story, but a coaching story…because the mainstream endorsed and tethered itself to Bortles-Manziel as the best QB prospects in 2014, and they are going to have massive egg on their faces—especially when Garoppolo shows his skills well above Bortles-Manziel. A Garoppolo-based success cannot stand…they are going to hate on Garoppolo something fierce.

I hope that when the Pats/Garoppolo beats Jacksonville by 3-4-5-6 TDs in Week 3, and as Bortles continues to flame out a la Geno Smith, that someone in Jacksonville remembers that the Jags coaching staff had this QB prospect right in front of their faces…and couldn’t see it.

— Mild controversy on Bobby Bowden proclaiming that Jameis Winston was seen as an embarrassment by FSU boosters, etc. What’s so controversial about that? How could he not be seen as an embarrassment by anyone outside of rabid/delusional FSU fan? I think some writers and analysts tried to tie ‘race’ into it as well. Funny, when everyone said all these same things about Johnny Manziel last year there was not a racial discussion.

You know this whole Winston-thing is going to be a flop in the NFL, right? The mainstream bought into this after his first few freshman games, and created a media-hype star…and now they are joined at the hip with him. It’s very similar to Johnny Manziel last year. Like Manziel, Winston is noted for a high IQ/high football IQ…but those smarts did not prevent Jonathan Football from being one of the most horrific QBs I’ve ever seen work a pre or regular season game.

Jameis Winston’s game is so flawed it’s comical—it’s there for everyone to see on tape and in his numbers…and it gets swept under the rug. Scouting is emotional and not scientific—no one will convince me otherwise. He has as much of a chance of making the short list of fantasy football keepers as Johnny Football - ZERO!

When given a chance to explain the ‘crab thing’ a few weeks ago, in an interview, Winston excused it away as a worker there told him he would ‘hook him up’. No remorse or accepting blame…just a pre-planned caper gone awry; chuckle-chuckle, wink-wink. What does Winston have prominently displayed at his post-draft party celebration? Crab legs! AND then he posted pictures of himself with the crab legs online to taunt society…and then was asked by the team to take the pics down. Enjoy that high football IQ…like about 137 other QBs have in today’s NFL. It won’t matter when you flippantly throw the ball off your back foot at the first sign of trouble…like Johnny Manziel…like what’s coming with Winston.

This is going to be a glorious disaster!

Stay tuned to ASL for the best NFL fantasy sleepers all season long!