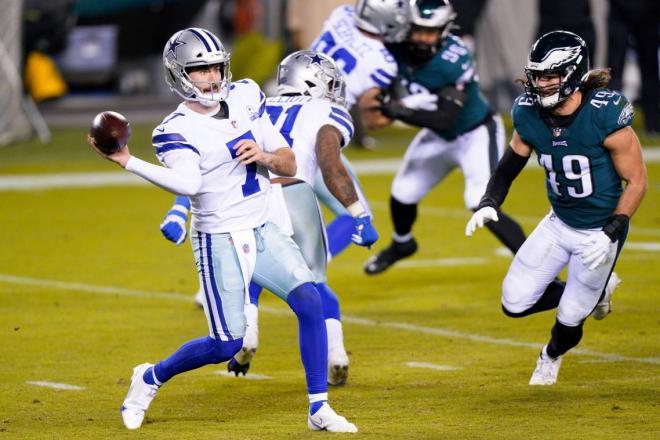 NFL: Which Teams Would Survive Losing Their Starting QB?

With the Colts new starting QB, Carson Wentz, recently going on IR with a foot injury, it brings to mind a burning thought: how many teams have a back-up quarterback capable of leading them to the playoffs when pressed into service after their starting QB suffers a long-term injury?

The answer is, "not many". This is problematic to say the least.

As we saw last year, the Dallas Cowboys struggled mightily when Dak Prescott went down with his gruesome leg injury.

Ben DiNucci looked out of his element, then Andy Dalton - coming off an injury of his own - had to shake off the rust before he found his bearings. By that time, the 'Boys playoff hopes had gone by the wayside.

What if Prescott gets injured again? Well, Dalton has gone to Chicago. That leaves DiNucci, Cooper Rush and Garrett Gilbert to run the offence. Good luck there.

How about the Super Bowl Champions, the Tampa Bay Buccaneers? If the unthinkable happens and Tom Brady gets injured, veteran Ryan Griffin or rookie Kyle Trask will be tasked with the job of keeping the Bucs in the playoff hunt until TB12 returns.

Let's look at the aforementioned Colts. Well, with Wentz hobbled for who knows how long, either Jacob Eason, Sam Ehlinger or Jalen Morton will take over behind center.

And if Aaron Rodgers gets laid low by the injury bug, the Packers will (shudder) turn to an inexperienced Jordan Love, though he is in his second year in Matt Lafleur's offense. Odds are, he would struggle to produce.

Of the Super Bowl contenders, it's clear that the Tampa Bay Buccaneers are the most vulnerable. If Brady suffers a season-ending injury, their bid for a second straight Super Bowl will also end. No disrespect to Ryan Griffin or Kyle Trask; they just don't have the track record or experience to get the job done.

The reality is that backups, as gifted as they might be, don't get the playing time needed to get up to true game speed and gel with their receivers.

Every team - especially Super Bowl favorites - had better hope their starting quarterback stays healthy. If they don't, a long-term or season-ending injury will likely mean a lost season if they don't have a capable backup sitting on the bench to keep the team in the playoff hunt while their star quarterback recovers.