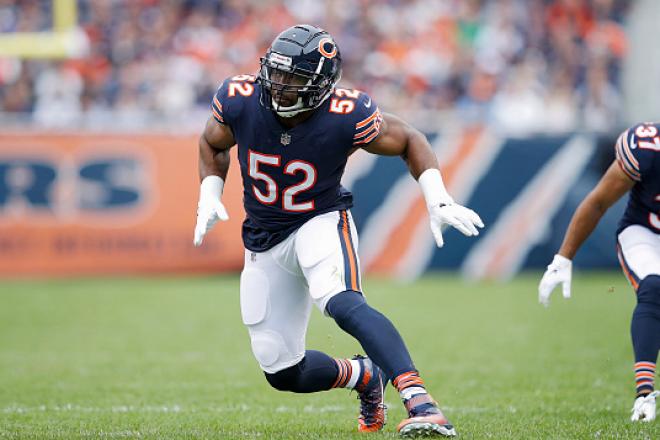 NFL: The Pressure Is On for These 4 Players

In 2017 and 2018, Goff looked like he was becoming what the L.A. Rams hoped he'd become - their franchise quarterback.

He'd established himself as one of the best play-action quarterbacks in the league, had overcome accuracy problems and had assumed the roll of a quiet leader who led by example.

Then, the Rams' o-line got banged up in 2019, and injuries to key players made it difficult to execute L.A.'s sophisticated offense. Goff struggled in 2019, and then those struggles continued into 2020. He was subsequently traded to Detroit for Matt Stafford.

While Stafford never won anything in Detroit, he was very productive and tough as nails.

In short, Goff has big shoes to fill. The moment he steps on the field, even in the pre-season, the pressure will be on to produce, and to prove that he can still perform at an elite level. It won't take long to find out one way or the other.

Most linebackers would be happy if they had a season in which they made 40 tackles, collected 8.5 sacks and forced five fumbles.

Not Khalil Mack. The ultimate disruptor, it was normal for him to be all over the field, putting up more than 50 solo tackles and 15-plus sacks most years. But last year he was just good, not exceptional.

Is age finally catching up with the 6'3", 260-pound Mack, who's now 30? Has his motor run so hot for so long that he's finally starting to slow down?

Now that the Bears look to have a decent offense, the pressure will be on Mack to get back to his old scheme-wrecking self to tilt the field and provide more opportunities for Andy Dalton & Co. to score on short drives after forcing three-and-outs or turnovers.

Question is, does Mack have any gas left to show he can still be a dominant player? Only time will tell.

At age 24, Barkley should be in the prime of his career. Instead, he's coming back from another devastating injury, this time after a horrific knee injury (ACL, MCL, meniscus).

Consequently, 2021 will be a pivotal season for the former Penn State standout. He must prove that he can stay healthy and play a full season.

If he can, he figures to come close to the stat line he put up in 2018: over 2,000 all-purpose yards and 15 TD's. Should he return to that form, his presence will make life easier of Giants QB Daniel Jones; a strong running game always benefits a quarterback.

Another injury would not only put Barkley's career in jeopardy, but it would also short-circuit the Giants' offense. It's time to produce, a fact that Barkley is surely well aware of. If he doesn't, the Giants may be forced - albeit reluctantly - to move on from him.

There's no question that Jameis Winston should be the Saints' new starting quarterback, and his coach, Sean Payton, will likely give him that opportunity.

The reason he'll get the opportunity is simple: he has the arm strength needed to stretch the field; Taysom Hill doesn't. Not only that, but he's proven he can do it. Problem is, Winston tends to complete as many passes to opposing DB's as he does to his own receivers.

Fact is, Winston had all of 2020 to watch Drew Brees and pick his brain. That should automatically make him a better quarterback. And if he can stay within the parameters of the plays that Payton calls - i.e., try not to do too much - he can be successful.

In fact, the Saints could be even better if Winston learns how to play within himself. He knows it, and his teammates know it. Now, can he show the discipline to do that when it matters the most? It will be interesting to find out.