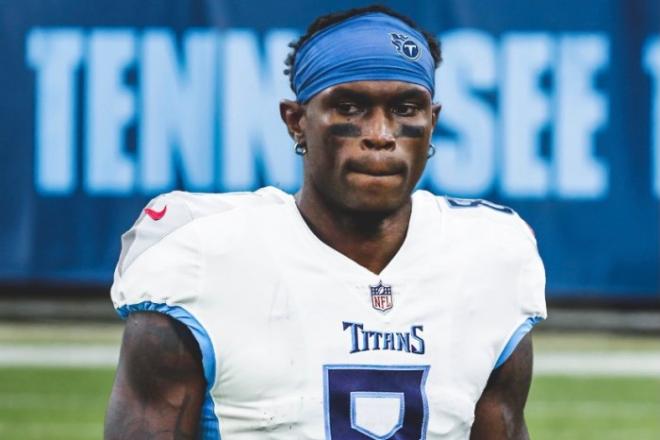 1) Can Julio Jones Produce in Tennessee?

On the surface, the Tennessee Titans' acquisition of WR Julio Jones looks like a huge move.

In Jones, the Titans are getting an injury-prone receiver who played just nine games last year. Not only that, but Jones is also 32, which means he's also on the downside of his career in addition to being fragile.

On the other hand, Ryan Tannehill & Co. are getting an accomplished wideout who - if he stays healthy - can create a two-headed monster along with emerging WR A.J. Brown.

There's no doubt that Jones will be motivated. He'll be playing for a legitimate Super Bowl contender on an offense that can roll up the yards when everything is firing on all cylinders.

It's up to Jones to prove the doubters wrong. If he can, the Titans will have a chance to play in February. If not, it will be clear that his best days are behind him.

2) Do the Packers have a shot without Aaron Rodgers at quarterback?

Suffice it to say things are not looking good in Green Bay.

If anything, Rodgers has steadily become more critical of Packers' management. And who can blame him? They draft a quarterback when they need clearly need help at receiver, bringing Jordan Love into the fold.

Then, they lose All-Pro center Corey Linsley and hard-hitting running back Jamaal Williams. Sure, they drafted WR Amari Rodgers (Clemson), but there were plenty of good wideouts they could have snagged before the third round.

All of which brings us to the current situation - Rodgers wanting out of Green Bay. If he does end up leaving, that will put the Packers in a true predicament.

Do they get a stopgap starter and groom Love to be their starter in 2022? Or do they give him the ball and hope he becomes the second coming of Justin Herbert?

Either way, it figures to be a long season in Green Bay if number 12 isn't behind center. The standard he set is mighty high, and it's unlikely that Love or any other quarterback will be able to come close to replicating the 26 wins Rodgers put up over the past two years. Nine wins would be a very good year without the reigning league MVP.

3) Will the Cleveland Browns be better with OBJ, or will they be better off without him?

There's no question that Odell Beckham Jr. is an incredibly talented football player. Few wideouts in the league can match his speed, catch radius and big play potential.

That said, there are also few wide receivers that can be so polarizing. For all his talent, OBJ comes across as being selfish, immature and petulant.

Was it a surprise that the Browns took off after he went out with a torn ACL midway through last season?

Nope. His absence took the drama out of the locker room and allowed QB Baker Mayfield to come into his own.

Freed up from the distraction of OBJ constantly complaining he wasn't targeted enough, Mayfield was free to spread the ball around to wideouts Jarvis Landry, Rashard Higgins and Donovan People-Jones.

Right now, everyone in Cleveland is saying the right thing - that a healthy OBJ will elevate the Browns' offense to another level. That will only happen if he embraces a key concept: that of teamwork, and being a good teammate.

4) Can the New England Patriots live up to all the hype?

It's one thing for something to look good on paper and another thing for it to look as good in real life.

That's the situation the Patriots find themselves in. On paper, their offense is vastly improved with two proven tight ends (Jonnu Smith, Hunter Henry) and upgrades at wide receiver (Kendrick Bourne, Nelson Agholor).

Likewise, their defense - which wasn't bad last year - also looks like it will be truly formidable in 2021.

Problem is, their starting quarterback, Cam Newton, is a question mark. If he can somehow find his MVP form, then the Pats are in business. If not, Mac Jones likely won't be ready to save the day.

And the fact is that a stacked roster that looked great on paper might not translate as well onto the field once the games are played for real.

Pats' fans should remember that before they start booking flights to Los Angeles to take in the Super Bowl at SoFi Stadium on February 6.

5) Will the Cowboys be a factor in the NFC East?

Cowboys fans have reason to be feeling cautiously optimistic.

Dak Prescott should be ready to take his rightful place as starting QB, the defense is looking marginally better and if Prescott is healthy, the Cowboys should light it up on offense.

Still, there are holes on defense. While the secondary will be better, it will be young and vulnerable to the big play.

And if Prescott - perish the thought - goes down again, there's (gulp) Garrett Gilbert or Cooper Rush as options at quarterback.

If everything goes well - there are no serious injuries to starters and the defense is better - then the Cowboys could be in the mix for a playoff spot.

If not, it will be a rebuilding year, which might not necessarily be a bad thing if Jerry Jones & Co. can remember it takes time (and patience) to build a contender.