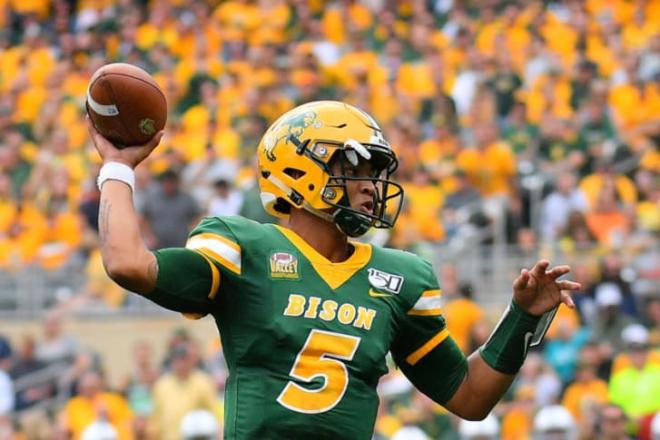 Here's what we've learned so far during the 2021 NFL Draft:

Sure, Trey Lance has the biggest upside of any of the quarterbacks in the draft. His sample size is also very small, and he played for an NCAA Division 2 school. Which means he's either going to be very good, or a bust.

Kyle Shanahan and John Lynch are hoping, with all their heart and soul, for the former, as they will forever be linked to rolling the dice on Lance.

Seems to me the Patriots fared pretty well with a quarterback who lacked athletic ability. If Jones is going to succeed anywhere, it will be in New England.

Sam Darnold must be really happy to be a Carolina Panther.

In a matter of two nights, the Panthers have built around Darnold more than the Jets did in three years. He will have better protection, more weapons at his disposal - and a coaching staff that will play to his strengths and help mend his weaknesses.

Look for Darnold - who's still only 23 - to blossom in Carolina.

The Green Bay Packers are out to lunch.

Packers' GM Brian Gutekunst just doesn't get it. Last year, he chose Jordan Love in the first round rather than getting a receiver for QB Aaron Rodgers.

This year - with Rodgers reportedly wanting out of Green Bay due to many of Gutenkunst's inexplicable moves - the Pack picks CB Eric Stokes (Georgia) from the 29th slot.

Only at the 85th slot in round three do they pick a wide receiver, Clemson's Amari Rodgers. At least that ensures they'll have one Rodgers on their roster.

Good news - Jerry Jones didn't trade up to get the player - TE Kyle Pitts - that he was so fascinated with.

Rather, he deferred to his scouting staff, who drafted LB Micah Parsons in the first round, CB Kelvin Joseph in the second round and DT Osa Odighizuwa and DE Chauncey Golston in round three.

Bear in mind, Cowboys fans, that this is just a start. That defense, while better, is still a major work in progress.

The supremely confident Lawrence - who experienced little or no adversity in high school or college - looked extremely self-assured during his coronation at the consensus number one pick.

Hey Trevor, you know you're going to a 1-15 team that's got a ton of holes to fill, right? You won't be able to right this ship on your own.

Meanwhile, Wilson - who hails from the metropolis of Draper, Utah - is going into the pressure cooker that is New York City. Bear in mind, the departed Sam Darnold, who hails from the Los Angeles area, was eaten alive in the Big Apple.

At least Wilson will have a competent head coach (Robert Saleh) to guide him, and better players around him. In other words, he will have a much better chance to succeed than did Darnold.