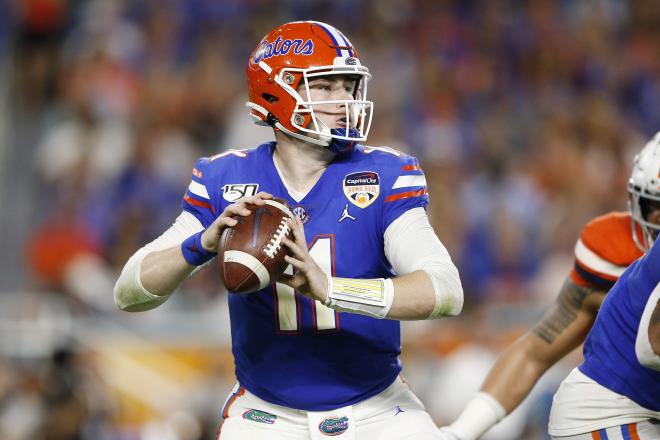 NFL: The Sleeper and the Forgotten QB

Can a quarterback that nearly led his team to victory in the 2020 Atlantic Coast Conference be a sleeper in the 2021 NFL Draft?

And Florida's Kyle Trask is just that. Which might be a good thing for a team like, say, the New England Patriots.

His detractors will tell you that he then went on to get walloped 55-20 by Justin Fields and Ohio State, putting up only 158 yards on a 16 of 28 day. Others will point out that he got sacked five times against the Roll Tide, and once against OSU.

Fair enough. But look at his stats on the whole, and he completed 301 of 437 passes for 4,283 yards, good for 43 TD passes against only eight interceptions - and a 68.9 per cent completion rate. Not the numbers that Joe Burrow put up in his final year at LSU, but still pretty darn good, you'd have to say.

All of which brings us back to the Patriots.

Right now, it's easy to imagine Bill Belichick with one of his patented all-knowing smirks as he schemes away in the dark recesses of his office at Gillette Stadium.

Sure, the top quarterback prospects - Lawrence, Wilson, Jones and Lance - figure to be gone by the time the Patriots get to pick from the 15th slot. No worries if you're Belichick.

Snap up Trask, and then - whether it be during the Draft, or after - sign Teddy Bridgewater - a.k.a. the Forgotten Quarterback - to a contract.

Making those two moves would accomplish three things. First, you - at least, hopefully - have your quarterback of the future. Second, adding Bridgewater would bring about legitimate competition for the starting QB position.

And third, if Cam Newton looks like the player that finished the season - i.e., a quarterback who could run, but couldn't throw the ball to save his life - then you can cut him and install the capable Bridgewater as starter. Meanwhile, Trask could be the affable veteran's understudy, and Jarrett Stidham could fill the role of backup QB.

With Bridgewater's steady play and a more dynamic offense and  improved defense, the Pats could post a 10-win season and make the playoffs. Trask could - as Patrick Mahomes did in Kansas City under Alex Smith - learn his trade from a fine mentor.

If he's deemed ready for 2022, fine. If not, you still have Bridgewater in place to steer the good ship Patriot.

Ideally, though, Trask would be ready (perhaps he'd even be ready by mid-season 2021) to use his big arm to connect with the likes of Kendrick Bourne, Nelson Agholor, Jonnu Smith and Hunter Henry.

Once again, the Patriots would be a fixture as a Super Bowl contender with Trask at the helm for the next five to 10 years. Best of all, we'd get to enjoy more of Belichick's cryptic, monosyllabic answers as he chases another Super Bowl title into what - his eighties?

That is, unless the New Orleans Saints sign Bridgewater as insurance, and Trask goes at number nine to the Broncos.

It's going to be very interesting to see how events transpire on April 29.