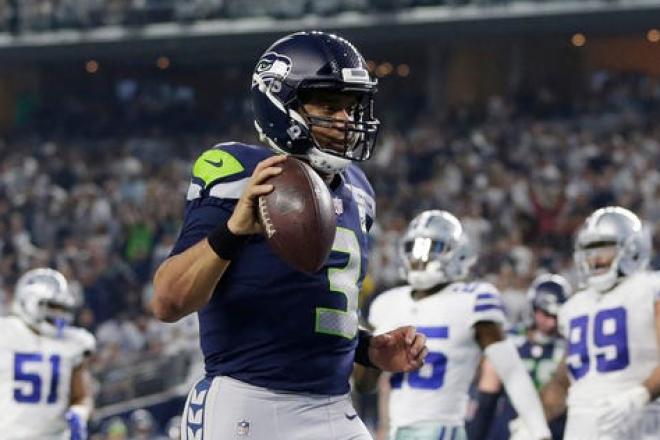 Imagine this: Russell Wilson no longer in Seattle's neon-tinged colors, but instead wearing Cowboys blue and white.

Or, how about this - Aaron Rodgers decked out in a wine-red San Francisco 49ers jersey?

And there's also a chance that we could see Deshaun Watson wearing aquamarine in Miami or the white, black and sky blue colors of the Carolina Panthers.

What are the possible permutations of all this?

In a league where teams live and die by their level of quarterback play, any team that manages to acquire one of these unhappy pivots stands to elevate in the standings.

Which isn't to say that Dak Prescott, Jimmy Garoppolo and Teddy Bridgewater are lousy quarterbacks. It's just that Wilson, Rodgers and Watson are so otherworldly in their abilities.

So, what if Wilson lands in Dallas or, say, Chicago (two of the teams he'd like to go to if the Seahawks decide to trade him)? Well, either team would immediately be better.

In the case of the Cowboys, as good as Prescott is, Wilson is a playmaker extraordinaire, someone who could bring the best out of CeeDee Lamb, Ezekiel Elliot and Amari Cooper.

If the 'Boys manage to improve their defense in the off-season, then, voila - they are an instant contender for the NFC East title.

The same goes for the Chicago Bears in the NFC North.

Were Wilson to head to the Monsters of the Midway, he would have a decent array of weapons on offense to work with - and one of the league's better defenses on the other side of the ball. With RW3 at quarterback, the Bears would be one of the favorites to claim the NFC North title.

Likewise, any team that gets Rodgers will be similarly transformed.

Just imagine how much fun he'd have with the 49ers' loaded offense. With the reigning League MVP behind center and a healthy defense, San Francisco would once again be one of the league's top teams, a legit Super Bowl contender.

On the flip side of the coin, what of the teams - Seattle, Green Bay and Houston - that could end up losing these three marquee pivots?

Suffice it to say they'd be in a world of trouble.

Who knows who the Seahawks would find to replace Wilson. In all likelihood, Seattle's new QB wouldn't be nearly as dynamic. If that came to pass, they would quickly go from good to mediocre.

In Green Bay, would the Packers elect to go with heir apparent Jordan Love, or bring in another quarterback? Were they to choose to go with Love, they'd have to live with his growing pains for a season or two and would inevitably slide down the standings.

At the same time, the Texans - who are already a shell of a franchise - would lose a premiere talent who only figures to get better.

Even if they did get Tua Tagovailoa or Teddy Bridgwater in return for Watson, they would, as good as they both are, pale in comparison to the mega-talented Watson. With Watson, the Texans were 4-12 last year. Without him, would they win even two games in 2021 with their depleted roster?

What's going to happen? Only time will tell.

That said, one thing is for sure.

The teams that have Wilson, Rodgers and Watson in 2021 will thrive, while the others figure to struggle in a league where quarterback play - either good or bad - plays a big part in determining where a team ends up in the standings at the end of regular season play.