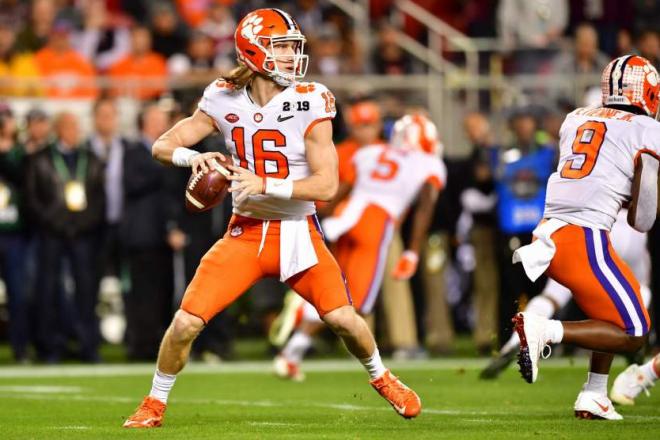 To say the least, early returns on the quarterback movement in the NFL have been intriguing - and we're less than a month into the off-season.

With Matthew Stafford (Rams), Jared Goff (Lions) and Carson Wentz (Colts) already having found new teams, it's time to take a look at where the top quarterback prospects might end up once everything shakes out in the first round of the 2021 NFL Draft.

The first thing to note is that several teams with top-10 picks will be looking for a new quarterback. Those teams start with the Jacksonville Jaguars at number one and New York Jets at number two - or do they?

After that, proceedings could get interesting.

The Jets now have a head coach in former 49ers defensive coordinator Robert Saleh. They also have Sam Darnold, who struggled (who wouldn't?) under departed head coach Adam Gase.

Darnold showed flashes of being the third overall pick in the 2018 NFL Draft and still has plenty of upside.

Although he's been rumored to be traded to Chicago, don't be surprised if the Jets decide to keep him and draft a wide receiver to provide Darnold - who could thrive under a good offensive coordinator - another target.

Of course, the Jets could trade Darnold and then take BYU's Zach Wilson, who has the size, accuracy and arm talent to make an immediate impact as a starter in the NFL.

Here's where things start to get intriguing. Assuming the Dolphins either stand pat with Tua Tagovailoa or trade him (with a raft of draft picks) to Houston for Deshaun Watson, they won't be in the market for a quarterback.

However, the Atlanta Falcons - they have the fourth overall pick - might be.

With a new coaching staff led head coach Arthur Smith, they may want to move on from aging QB Matt Ryan. If that's the case, a logical pick would be Ohio State's Justin Fields, a strong-armed, mobile pivot who appears ready to be an NFL starter. Or, they could choose to stick with the still-productive Ryan.

Next, the Cincinnati Bengals, who have the fifth pick, don't need a quarterback. They will likely select an offensive lineman or wide receiver at that spot.

Then, there's the Philadelphia Eagles.

Sitting at number six, they sit in an interesting slot. Sure, they have Jalen Hurts penciled in to start under center. That said, he was OK as a starter - a good game manager, but maybe not as dynamic as the Eagles would have liked.

Big, mobile and smart, he showed - albeit in a small sample size (16 games, 28 TD's, zero interceptions) that he has the tools to be a franchise quarterback. He could be Hurts' understudy, and then come in when ready, as when Patrick Mahomes did in Kansas City. Or, the Eagles could pick a wide receiver.

At pick number seven, the Lions - who now have Jared Goff under center - will surely pass on a quarterback.

Go to pick eight, and there are the Carolina Panthers. Will they trade for Deshaun Watson? Will they stick with Teddy Bridgwater, who proved more than capable last year, and draft a wide receiver? Or will they trade up to try and get Fields?

Meanwhile, the Denver Broncos, who pick from the ninth spot, aren't totally enamored with their starter, Drew Lock. They could have Lance, Mack Jones or Kyle Trask to choose from.

At number 10, the Dallas Cowboys, with Dak Prescott and Andy Dalton, are set at the quarterback position. They will use their pick to bolster their awful defense.

One thing is certain about the 2021 NFL Draft.

There will be quarterbacks taken high up. Question is, where will they all end up? It will be fascinating to see the process unfold in real time!