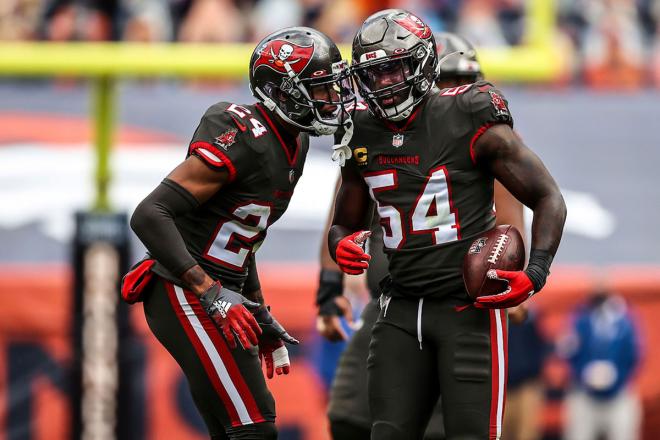 In fact, some would argue that it has almost singlehandedly brought the Bucs to the Super Bowl.

The defensive line has been flying around like so many Tazmanian Devils, while the secondary - led by cornerbacks Sean Murphy-Bunting and Carlton Davis (in the absence of safety Antoine Winfield Jr.) -  has become a legion of ninjas, covering and battering opposing receivers with ruthless efficiency.

And while they've been somewhat overlooked due to the inspired play of the D-line and secondary, Tampa's linebacking core has also been very good. So good, it seems, that they've almost gone unnoticed; they've covered the middle of the field that well during the Bucs' playoff run.

Well, chances are linebackers extraordinaire Devin White and Lavonte David will be noticed on Super Bowl Sunday. That's because they will be charged with shutting down - or at the very least limiting - the likes of all-world TE Travis Kelce and WR Sammy Watkins as they try to work free on sneaky underneath pass routes.

While it will be a big ask, it's doable.

Both linebackers have the range and speed to stick with Kelce - but maybe less so with the faster Watkins.

Either way, that means they will have to jam both receivers within five yards of the line of scrimmage to slow them down. If they can do that consistently, they will have a chance to stay close to Kelce and Watkins, making it challenging for QB Patrick Mahomes to make easy completions.

His timing and positioning will need to be near-perfect on every play. If it isn't, it will be very difficult to disrupt Mahomes enough to prevent damaging, drive-sustaining completions to Kelce and Watkins.

The long and short of it is that the Bucs will have to conjure up a perfect defensive storm to slow down KC's quick-strike offense: constantly pressure Mahomes, stop the run, choke off underneath passes - and limit long completions.

Problem is - as the Buffalo Bills found out - the Chiefs' offense can hurt you in ways that are almost too numerous to count. The Bills largely took away the deep ball in the AFC Championship game, yet they still got blown out.

If the Bucs' defense doesn't establish itself early, chances are the game will be out of hand by the fourth quarter. If that's the case, TB12 won't get the opportunity to engineer yet another legendary game-winning drive.