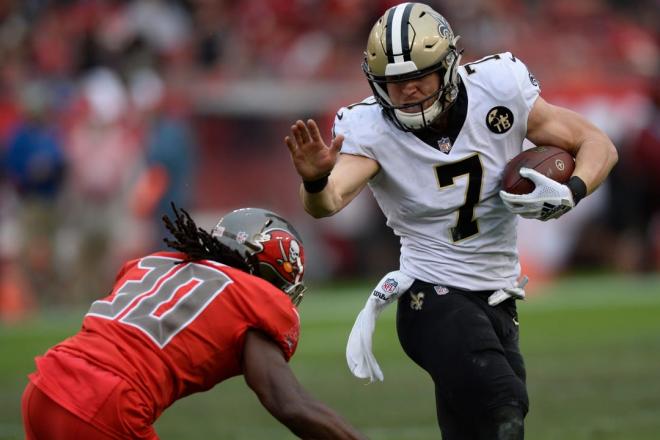 Which Teams Will Make the Final Four?

Yes, the Browns can beat the powerhouse Chiefs. However, they'll have to play a perfect - or at least near-perfect - game to get past Patrick Mahomes & Co..

First, Cleveland must run the ball effectively. Not only will that open up the passing game, but it will keep the Chiefs' explosive offense off the field.

To do that, Nick Chubb and Kareem Hunt will have to combine for 150 yards along the ground - and QB Baker Mayfield will have to play an efficient, error-free game. It will be critical for the Browns to keep KC's quick-strike on the sidelines.

On the defensive side of the ball, DE Myles Garrett and his defensive line mates will have to pressure Mahomes all game long, while the Browns' secondary will have to blanket KC's elite receiving corps.

It's a lot to ask, but it is possible. Is it probable? That's another matter altogether, as this the 14-2 Chiefs we're talking about.

With his first playoff win under his belt, Ravens' QB Lamar Jackson - now that that 300-pound gorilla is off his back - knows he can produce when it matters most. He can beat you with his legs or his arm, and he has the weapons at his disposal to make you pay in a heartbeat.

Consequently, the Bills' defense will have its work cut out for it. Their mission - whether they choose to accept it or not - will be to contain Jackson and RB J.K. Dobbins. If they can do that, then that will force Jackson to beat the Bills with his arm.

If the Bills defense can do that and their offense can continue to produce with QB Josh Allen playing the best he's ever played - then expect the Bills to prevail. If they can't - and Jackson is able to break containment consistently - then the Ravens could author a second consecutive upset.

The Bills have developed an aura of greatness, but that aura will be severely tested when they line up against the Ravens on Sunday.

This game will feature a collision between opposing (and opposite) forces: The Unstoppable Force (a.k.a. the Packers' high-powered offense) and the Immovable Object (that would be the Rams' defense).

In short, the Rams' defensive line, led by Aaron Donald (will his damaged ribcage permit him to be fully effective?) will be tasked to harass and hit Packers' QB (and League MVP favorite) Aaron Rodgers all day long. At the same time, Rams all-world cornerback will have to shut down Packers' star WR Davante Adams.

With John Wolford out with a neck injury, Rams normal starting QB Jared Goff - who still has three pins in his right thumb after having surgery to repair a fracture sustained less than one month ago - will have to play. His accuracy an issue, he'll have to pick his spots when throwing, and count on rookie RB Cam Akers to tear it up on the ground.

The skinny? The Rams' league-best defense will have to rise up and shut down Rodgers just as they shut down Seattle's Russell Wilson last week. If they don't - and the Packers' offense gains early traction - then L.A.'s season will find the end of the line at Lambeau.

Brees is the NFL's all-time leader in passing yardage and TD's (by a nose) over the G.O.A.T., who only has six Super Bowl rings to his credit. As intriguing as the match-up is, though, it's about far more than Brees and Brady.

If TB12 has a weakness, it's throwing effectively in the face of pressure (reference his two Super Bowl losses to the Giants). If Cam Jordan and his mates can hurry and hammer on a regular basis, he'll be hard-pressed to find the likes of Antonio Brown, Gronk, Mike Evans and Chris Godwin.

Likewise, Tampa's defense will be charged with the unenviable task of shutting down Brees, who has Alvin Kamara, Michael Thomas, Emmanuel Sanders and Taysom Hill to distribute the ball to.

Both quarterbacks figure to be dialed in with so much to play for. Question is, which defense will rise to the occasion to douse the Super Bowl dream of one of the two best QB's ever to lace it up in the NFL? You'll have to tune in to find out.