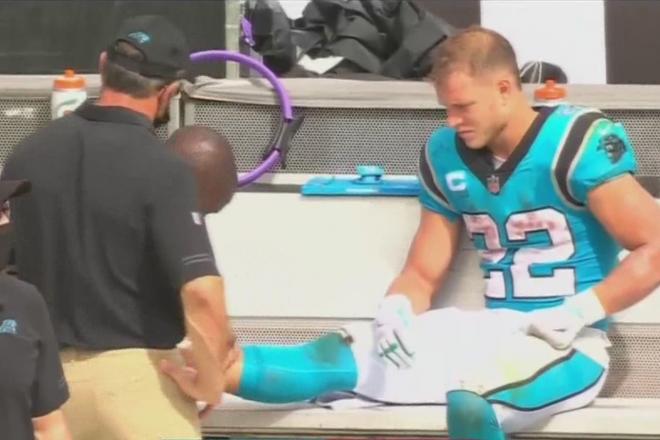 5 Takeaways From The 2020 Fantasy Season

The 2020 fantasy football season has concluded and now we get to enjoy the NFL playoffs and what should be an exciting offseason. You may be thinking to yourself, "Isn't it a little early to be thinking about the 2021 fantasy football season?" Well, for starters my beloved Panthers are not in the playoffs (shocker, I know), but it is as important as ever to reflect on the previous fantasy season when it is still fresh in your mind.

Here are five takeaways from the 2020 season that fantasy managers should take going into this year.

Some of us walked out of draft night with players like Christian McCaffrey, Michael Thomas, Saquon Barkley, Le'Veon Bell, DJ Chark, Mark Ingram, and/or Zach Ertz and thought, "Wow, I have a championship team right out the gate!" Well, unless you excelled at takeaway number five on this list, you're probably still complaining about how injuries ruined your season, how you would've won if players didn't get hurt, or how you would've picked Henry or Cooks in the first round, but you drafted the wrong person and that's why you didn't win in 2020 (or whatever else you tell yourself to help you sleep at night).

Draft night is a great way to set your team's foundation, yes. However, injuries still occur, regression is very much applicable every year (Ertz...), suspensions and everything else that makes you want to rip your hair out during the season won't magically go away next year.

Diontae Johnson, Justin Jefferson, DeAndre Swift, Brandin Cooks. These are names I want to highlight as they each saw a tremendous drop in roster percentage after the first couple weeks. However, each one emerged as a reliable fantasy contributor. Now, we don't win at the draft but that doesn't mean that if a player you drafted had a poor first two weeks that it's writing on the wall and it will be the mean/average level of play for their season.

The rookies, Jefferson and Swift, were drafted with high hopes because of either the situation/team they've landed on or their skillset coming out of college, or, both. That was the case here. Swift started out the first two weeks salvaging his fantasy score and putting fantasy managers on high alert, this was especially the case when he saw only one touch in Week 3 against the Cardinals. Jefferson started his first two weeks with three targets respectively and a combined yardage of 70 yards. Both players' fantasy stock plummeted. However, after the Week 5 bye for Swift, he became a reliable weekly RB2 in almost every given week and rewarded fantasy managers who stuck with him. Speaking of rewards, those who waited only two weeks to analyze Jefferson before throwing him to waivers missed out on his WR1 reward.

Diontae Johnson battled injuries in 3 of his first 5 games, however, in both of his two healthy games he totaled double digit targets. It was the talk coming out of camp, it showed when he played, and those who stuck with him after Week 6 reaped the benefits as he saw only two games with under double digit targets from Week 7 until Week 16.

Cooks and Deshaun Watson were adjusting to an offense without Hopkins and personnel changes.  Those who stayed patient after the Bill O'Brian days and waited to see how the coaching changes would work out in Houston saw a huge pay day in both Cooks and Watson. After Week 4, Cooks was a reliable WR2 and Watson a QB1.

The point here is that you don't have to wait an eternity for a player to pan out after the draft. Now, you shouldn't wait half the season, but you shouldn't call it quits on your draft capital after a mere two to three week sample size. Hindsight makes this an "Easy for you to say" takeaway, but it's something we need to keep in mind next year, especially with another strong rookie class coming in.

Drafting quarterbacks in the first round, like in this past year with Mahomes and Jackson, isn't the worst move a fantasy manager can make at the draft. But it isn't the most sound decision either. Top quarterbacks come in all different rounds and for team structure, you'd rather take a Nick Chubb, Alvin Kamara, Dalvin Cook or Derrick Henry for your team and then take a quarterback who falls like Aaron Rodgers (who finished one spot ahead of Mahomes in fantasy scoring) or Ryan Tannehill (who finished three spots ahead of Jackson) to round out your QB position. Allen, Murray and Wilson all sat between the 4th and 6th (maybe 7th) rounds in drafts last year; more than enough rounds to build a solid foundation of skill position players. Brady (QB8), Tannehill (QB7) and Herbert (QB9) were all undrafted/late round pick ups that cost you virtually nothing in draft capital or risk. This happens every year. It isn't an anomaly. Having someone as stable as Mahomes may feel like a great decision and it is nice, but having the immense upside and stability of a Henry in a vital skill position vastly outweighs the stability of a quarterback.

Next year, some quarterbacks like Brady, Tannehill, Rodgers, Herbert and others may find themselves at the back half of drafts at a value. This is called a steal. Use that opportunity next year.

The Panthers, Giants, Browns, Cowboys, Washington and other teams found themselves with a new head coach either at the start of the season or mid way through. I'm going to use one team in particular here. The Browns brought in Stefanski and with him came his offensive game calling. What is Stefanski's game plan, you may ask? Run the ball. Run and run a lot. The value of Chubb and Hunt had definitely risen at the draft but it didn't rise enough. Stefanski produced two RB1's. TWO! Why is this important? Coaches have game plans and more often than not, they stick to 'em. Another example is Ron Rivera. Rivera loves to utilize the tight end, for instance, and made Logan Thomas a very fantasy relevant tight end. So, yeah coaches make a difference in fantasy football.

Be on the lookout this offseason for coaching/coordinator changes.

Teams with vacant positions are:

4) If in multiple leagues, branch out; don't draft the same players in every league

This is a great takeaway. We may really like a select few players in a coming year, but don't make it your life mission to acquire that certain player in every league imaginable. For me, as an example, I was very high on DJ Chark this year. I drafted him in almost every league, I even reached in a few drafts to make sure I secured him. Did that pan out? Well... No. No it did not. With injuries and the introduction of COVID, it has grown increasingly difficult to know who will be in your lineups for an entire season.

Liking a player a lot is one thing, but risking every fantasy league because of one, or a few players, isn't the best way to increase your odds of winning multiple leagues.

Thanks to ASL's founder, Leonard LaPadula, on this one.

5) Roster depth is a vital step toward a championship team

This may seem simple, and for the most part it is, but it shouldn't be forgotten when going into next year. Always plan as if you are going to lose a RB, WR or a QB during the entirety of the regular season. Injuries are a part of the game, and with COVID, the need for depth grew to an all-time high. Move underperforming players for upside or volume players on the waiver wire, or move a position you have an abundance of for a position you may be lacking. Always have a well-rounded bench to fill any skill position hole that may arise as your season advances.

I hope this article brought some sort of value for you as we enter the offseason. Don't forget to refer to this as the 2021 football season nears and most importantly, enjoy the offseason!

I'll leave you with this - The most important facet to a fantasy manager's game is the ability to adapt, which can bring unparalleled balance to a game with a heavy dose of uncertainty.

Chris Hexter is a former Towson University Tiger who majored in Communications and minored in Mass Communication Studies. Chris is a fantasy football writer and public relations and marketing professional for manufacturing and IT companies. Besides beating his friends in his home league, Chris enjoys shanking balls in golf, gaming, and spending time with his loving girlfriend (she made me say it). You can find him on twitter at https://twitter.com/ChrisHexter?s=09