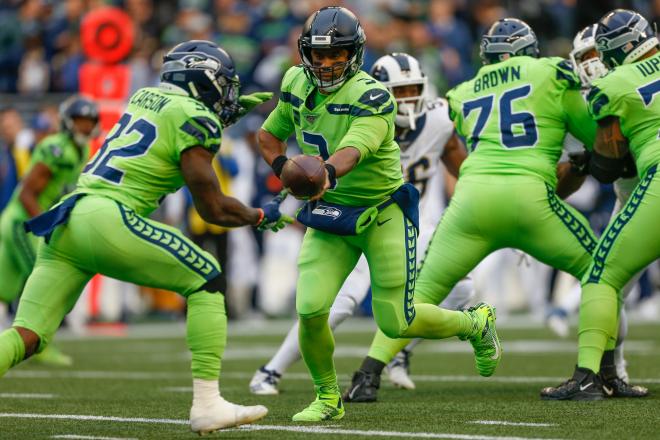 Going into Week 17, six teams have deservedly clinched their division and will soon be heading into the playoffs. As good as each team is, I still have these question about each team's ability to make a deep run toward the Super Bowl:

Seattle Seahawks. While the NFC west champs have improved of late, their all-round play needs to be even better if they are going to make a deep run in the playoffs. In other words, the 'Hawks will have to do a better job of playing complementary football.

First, their defense is going to have to play at the same level it has in the past few games.

At the same time, Seattle's offense will have to be more consistent. If Russell Wilson & Co. can't sustain (and finish) drives then a still-questionable defense will be on the field for far too long. Accomplishing this will require a more productive running game to open up the passing game.

Jamal Adams and his defensive mates will need adequate rest to continue their fine play in the playoffs. If the Seahawks fail to attain that critical offensive and defensive balance, their playoff run will be a brief one.

Pittsburgh Steelers. Right now, the burning question is, was the Steelers offensive outburst against the Colts a sign of things to come, or was it an isolated second half outburst?

Granted, the Steelers have time to figure things out, but two things are for certain: play calling must be more creative (i.e., more attempts to stretch the field with their talented wide receivers) - and they will have to find a running game to take pressure off Ben Roethlisberger.

While Pittsburgh's defense is one of the league's best units, it can't be expected to carry the team all the way to Tampa.

New Orleans Saints. Despite an 11-4 record, questions abound in the Big Easy. Not surprisingly, most of those questions involve the Saints' offense.

Is Drew Brees healthy enough to make another Super Bowl run? Will Michael Thomas be 100 percent when (and if) he returns for the playoffs?

Can the Saints' highly-ranked defense continue to limit opponents enough to overcome a potential lack of offense? The answer is likely yes. But Brees will have to have good protection and Thomas to throw to if New Orleans is to make it to the championship game in Tampa.

Green Bay Packers. So many things need to continue to go right for the Packers for them to make it to the Super Bowl.

To that point, Aaron Rodgers needs to stay healthy, Davante Adams must keep playing like the league's best wide-out, Robert Tonyan has to continue doing his Travis Kelce impression and Aaron Jones and battery mate A.J. Dillon need to be productive out of the backfield.

Additionally, the Packers' defense will have to elevate their game to limit opponents and give Mr. Rodgers as many chances as possible to shred opposing defenses. The odd catch by wide-outs Marquez Scantling-Valdez, Eqanimeous St. Brown and Allan Lazard would be a big help, too.

Buffalo Bills. The 12-3 Bills are currently tied for the league's second-best record with Pittsburgh and Green Bay.

And while their offense is dynamic - they can score points in bunches - their defense, while good, has been inconsistent. Still, the Bills are one of the best-balanced teams in the league.

That said, they're still young. Will Josh Allen and Co. play with the same cool self-assurance in the post-season that they've displayed in the regular season? They'll get their chance soon enough.

Kansas City Chiefs. Although the 14-1 Chiefs have experienced a few hiccups during the regular season, they've been minor ones.

By and large, they've been dominant, occasionally falling asleep, only to wake up and do what they have to win - the mark of a true championship team. Over the course of a long regular season, you have to conserve energy, and the Chiefs have learned how to do that.

Barring an injury to all-world QB Patrick Mahomes or Travis Kelce, expect them to flip the switch to full-on once the post-season begins. With a loaded offense and deceptively good defense, the Chiefs are odds-on favorites to repeat as Super Bowl champions.