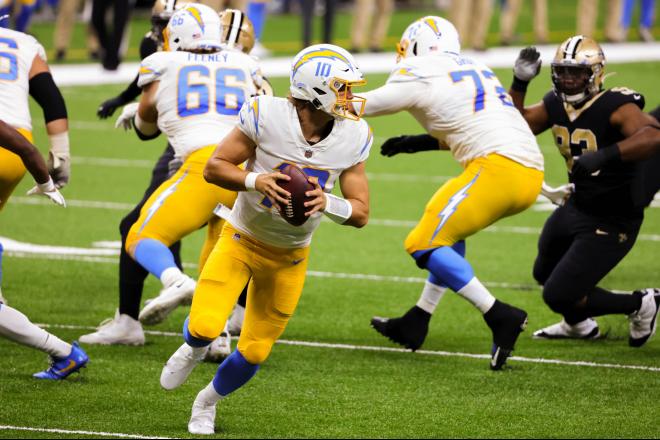 For Real & Not For Real NFL Offenses

Justin Jefferson, WR, Minnesota Vikings. While RB Dalvin Cook has been getting most of the attention in Minnesota, Jefferson has been quietly putting up big numbers of his own.

Playing bigger than his listed size, J.J. has recorded four 100-plus yard games, is arguably Kirk Cousins' favorite target, and is on pace to easily surpass 1,000 yards. Not bad for a rookie.

Fact is, Meyers has emerged as a go-to receiver for Cam Newton in the absence of Julian Edelman, consistently finding holes in defenses to make timely, drive-sustaining catches.

Once Edelman returns, the Pats will have a solid receiving corps with him, N'Keal Harry, Meyers - and another, up-and-comer, WR Damiere Byrd - on the receiving end of darts from Newton.

Damien Harris, RB, New England Patriots. It appears the Pats are no longer going the platoon route with their running backs.

Little wonder, as the 5' 11", 213 pound Harris has carried the ball 85 times for 471 yards, good for 5.5 yards per attempt. Powerful and elusive, he's steadily developing into a premiere running back.

Add the versatile James White into the mix, Newton - when everyone is healthy - figures to have plenty of weapons at his disposal.

Christian Kirk, WR, Arizona Cardinals. Quite understandably, DeAndre Hopkins and Larry Fitzgerald are the marquee receivers out in the desert.

That said, Kirk has been a model of consistency thus far this season, snagging 27 passes for 427 yards and 6 TD's; he's also averaging 15.8 yards per catch.

With his penchant for the big play, opposing defenses can't key on Hopkins or Fitzgerald. If they do, QB Kyler Murray has Kirk at his disposal, and the 5', 11", 200-pound wideout has already proven he can burn DB's when presented with single coverage.

Joe Burrow, QB, Cincinnati Bengals. Many experts wondered if Burrow's success at the college level would translate to the pros.

Well, wonder no more. Deceptively mobile, ultra-competitive and uncannily accurate, the 6' 4" pivot has already shown that he's a cornerstone that the Bengals can build around.

Justin Herbert, QB, Los Angeles Chargers. This was supposed to be a developmental year for the former Oregon star.

Thrown into service after starting QB Tyrod Taylor was injured, Herbert has displayed the arm talent, mobility and improvisational gifts that made him a top-six first round pick.

Tua Tagovailoa, QB, Miami Dolphins. Granted, the sample size is small - just three games - but Tua is displaying the same qualities that made him a sensation in college.

Smart, accurate and elusive when he needs to be, he's put together three wins and a sterling QB rating of 104.8 with 5 TD's, zero picks and an efficient 519 yards.

Clearly, the Dolphins weren't rushing him when they handed him the keys to the offense in week eight.

Leonard Fournette, RB, Tampa Bay Buccaneers. For some reason, Fournette always seems like he should be doing more with all that talent.

Drew Lock, QB, Denver Broncos. After throwing four bad interceptions in week 10, the 6, 4", 228-pound pivot finds himself sporting some of the worst stats of any starting QB in the NFL.

With a QB rating of 66.5, just 1,479 yards and a meagre 7 TD tosses against 10 interceptions, he's on the verge of playing his way out of a starting position.

The Entire Chicago Bears offense. No one in Chicago knows for sure what ails the Bears' offense. Is it lousy play calling? Poor quarterback play? A lack of talent?

The offense just can't score, leaving it up to one of the league's best defenses to win games single-handedly. The result? A mediocre Chicago squad that's going nowhere fast.