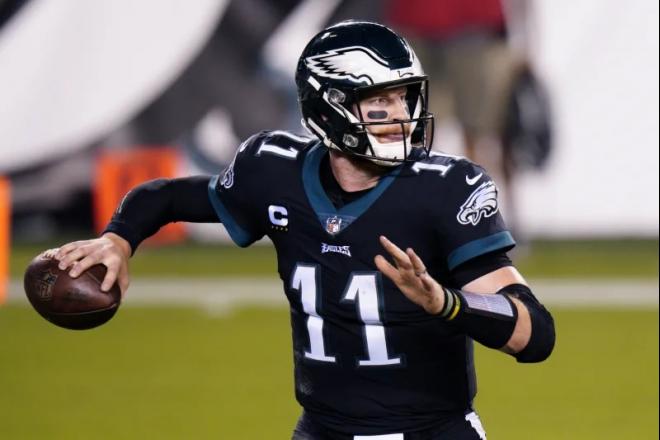 Well it’s 2020 and although I don’t like to play into the narrative of how daunting this year has been, I’m going to do it… because this year’s fantasy season has done a splendid job encompassing everything about 2020. First, Adam Gase is still a head coach, so that’s still a thing. So far this year undrafted free agent, James Robinson, is ahead of Ezekiel Elliott in points per game and behind only Alvin Kamara in total points scored this year. In four-point touchdown leagues, Carson Wentz is 11th in points per game, Lamar Jackson is 12th. Odell Beckham Jr. just suffered a season-ending injury and is out for the year. Antonio Brown and Dez Bryant are back on NFL teams, and now I’m waiting for the Bears to sign Chad ‘Ochocinco’ Johnson to their team as a kicker. Oh, and Gase is still a head coach. What a world, what a world!

In the beginning of the year, you could have traded for Wentz with only a gas station hot dog and a bag of stale chips. But since Week 3, Wentz has been a top five quarterback for fantasy, and it won’t stop this week against the Cowboys defense. The Cowboys defense has just one interception and fumble recovery against opposing quarterbacks and the lack of turnovers should be compelling enough. But the defense is also allowing opposing quarterbacks to average at least 20 fantasy points per game. Wentz is putting this offense on his back and with his five rushing touchdowns so far this season, he is a worthy start now and into the future.

Okay, so this is easy, I know, but I need to throw some softballs every now and then to keep you on your toes. See, I’m doing this for you. But really, Hunt has been amazing this year, even when in a backup role behind Chubb. The Raiders are allowing the third-most points per game and have yielded the third-most receiving yards to the running back position so far this year. Hunt is primed to be this week’s RB1 and even when Chubb returns, Hunt will remain a very solid flex option week in and week out. But let’s not think about that right now, let’s enjoy the moment.

Hey, Tennessee is still bad against wide receivers. Yeah, last week I said play Claypool, but I totally meant Johnson, the names are so similar. But Tennessee is allowing nearly 29 points per game to wideouts this year, and I expect the receiver who just averaged 17 yards per target last week, to have a monster game this week. Last week against the Titans, Ben Roethlisberger had all the time in the world to throw and even with a bad Bengals line, Burrow should be afforded more than usual time in the pocket, cultivating more time for Higgins to use his speed to get open down field. Higgins has already established his rapport with Burrow, and it will continue this week.

I’ll start with this – Foles loves throwing to his tight ends, and it shows. Graham has seen 5 or more targets in all but one game so far this season. That won’t change this week when the Bears try to keep this game close against the Saints. The Saints are a good defense, but they have been exploited in some facets of their game, none more than the tight end position, where the Saints allow the third-most points per game. Allen Robinson is banged up and if he doesn’t suit up, I’m all in on the guy who invented the telephone. What? That wasn’t Jimmy? Age is but a number, I guess.

Kansas City’s defense is very good. They can be exposed at times by the running back and sometimes the tight end. Good thing they play against an offense that doesn’t use their talented tight end and traded away one of the best all-around backs in football to use a running back who’s average yards per attempt is 3.7; remove the decimal and you have the age of their other running back. Not kidding. There is not one person that should scare you enough on the Jets offense for you to bench the Chiefs defense this week, so don’t.

The Indianapolis defense is fresh off their bye and ready to work on the Lions offense. This is more about the defense than Stafford. Indianapolis has simply been amazing against opposing quarterbacks having allowed 11.7 fantasy points per game so far this year. Head Coach Matt Patricia will plan to run the ball early and often to wear down this defensive front seven. Not the formula you want for a quarterback option in fantasy in a tough matchup.

Justin Jackson and Joshua Kelly are back to splitting work and Justin Herbert has received the teams’ blessings to sling the ball left and right. The Broncos are vulnerable against the pass, but not so much the rush. So, two decent running backs splitting work against the best fantasy defense? I want no parts. Sling away, Herbert!!

Devante Parker and Preston Williams, another twofer! There are a few reasons we have them here:

Engram is one of my favorite tight ends. He has tremendous athleticism and poses a unique mismatch every week for opposing defenses. There is only one big problem with that; the Giants are not using him. And you may look at some of his games and see high target totals, well great, but Engram's average target distance is 5.1 yards. He isn’t seeing enough deep targets and combine that with a mere 5 red zone targets on the season and you have the position's number one bust in 2020. He also faces a defense giving up the seventh-fewest points to the position this week. Please trade him away, New York.

The Bears defense salvaged their fantasy day last week with a touchdown, but besides that, looked very bad against the Rams having accumulated only one sack in the contest. Now, they are a risky start facing a Saints offense who doesn’t need Thomas or Sanders to make opposing defenses suffer. Look for streaming options in fantasy friendly matchups like the Eagles, or if you are going deep, the Titans.