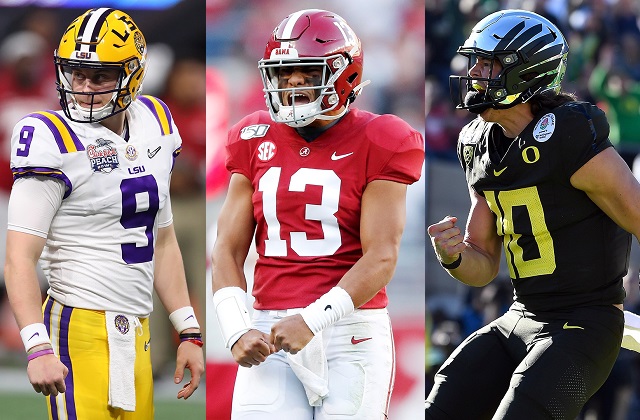 Few NFL drafts promised to be as intriguing as the 2020 edition of the NFL Draft.

Fortunately, it delivered on the intrigue (many haven't).

Now comes the big question: which of the three premium college pivots will sit at the top of their class at the end of the 2020 season?

That's a tough question, as there are many variables that can - and likely will - affect how the three young quarterbacks perform during the season.

The first variable is pre-season preparation.

With training being carried out virtually due to the ongoing COVID-19 pandemic, neither Burrow, Tagovailoa or Herbert will have much of a chance to develop chemistry with their receivers and running backs.

Sure, they'll know the playbook and have most of the technical wrinkles of the offence mastered, but they - for the most part - won't have a good handle on the quirks and tendencies of the people they're going to be throwing to. This could make for sketchy results early in the seasons, with their respective offences getting off to slow starts.

Variable number two is readiness to step in and perform at a high level in the pros.

As many hot quarterback prospects have found out, defensive players in the NFL are much bigger, stronger and smarter than those they played against in college.

Consequently, it's critical that Burrow, Tagovailoa and Herbert process these differences quickly and make the adjustments necessary to be successful against opposing defenses. This could take time.

That said, each of the three quarterbacks brings different strengths to the table.

Burrow sees the field well, is deceptively mobile and very accurate (at least at the college level, where he completed over 75 per cent of his passes in his final year).

Tagovailoa has a quick release, is an exceptionally precise passer and can be quite elusive when forced to scramble. Herbert, the biggest of the three pivots, has a very strong arm and, for a man who goes 6' 6",  230, can run very well.

At present, the Bengals' receiving corps is quite thin, and Burrow doesn't really have a go-to running back to use as an outlet. His offensive line is also mediocre at best. meaning he could be running for his life at times. As many a quarterback has found out, it's difficult to throw darts on the dead run.

And while the cast surrounding Tagovailoa is better, here's the caveat: will he even play, at least early in the season?

Chances are good that Miami management will hand the ball to Ryan Fitzpatrick at the beginning of the season to allow Tua to heal and acclimatize. Then - if Fitzpatrick falters, or gets injured - he will be better prepared physically and mentally for the challenge in front of him.

It could be argued that Herbert has the best chance to excel early, as the Chargers' o-line is decent; he also has Austin Ekeler in the backfield and Keenan Allen leading the receiving corps. With time to throw and weapons to throw to, Herbert could be the young pivot that impresses most, at least in the early going.

Suffice it to say it will be interesting to see how each quarterback fares during the upcoming NFL season.

Will Burrow's confidence and swagger carry him to the top, or will Tua's incredible instincts enable him to shine brightest? Or will Herbert's immense physical gifts come to the fore to help him rise to the top of the 2020 quarterback class?

Or, will a dark horse come out of the shadows to surpass all three?

It will be fun to see what transpires!